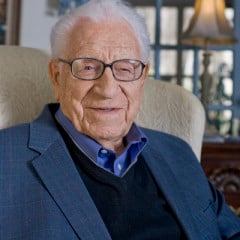 Grammy-winning gospel singer George Beverly Shea (pictured here in 2008) has died at 104 – a life as full as it was long for the man behind the booming voice that for decades rang out at Billy Graham’s crusades, and then years after Graham stopped holding big public events. Photo courtesy Billy Graham Evangelistic Association

(RNS) George Beverly Shea, whose signature baritone voice was a standard feature of Billy Graham crusades for more than half a century, died Tuesday (April 16) at age 104.

He died after a brief illness, the Billy Graham Evangelistic Association announced.

Shea, who was 10 years older than Graham, met the famous evangelist seven decades ago when he was working at Chicago’s WMBI, a Moody Bible Institute radio station. The evangelist heard him singing on the program “Hymns from the Chapel” and asked Shea to sing on his new radio program.

“I’ve been listening to Bev Shea sing for more than 70 years, and I would still rather hear him sing than anyone else I know,” the ailing Graham said in a statement. “I have lost one of the best friends I have ever had, but he and I look forward to seeing each other in Heaven relatively soon.”

Shea, who lived about a mile from Graham in Montreat, N.C., sang before Graham preached as they traveled the globe, often “I’d Rather Have Jesus” or “Victory in Jesus.” “I have sometimes said that I would feel lost getting up to preach if Bev were not there to prepare the way through an appropriate song,” Graham said in his autobiography, “Just As I Am.”

“I got a bang when I used to hear Elvis Presley sing my two words,” he told Religion News Service in a 2004 interview. 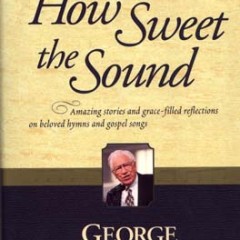 Graham spokesman A. Larry Ross said Shea — who was the oldest living recipient of a Grammy Lifetime Achievement Award — sang “How Great Thou Art” during each crusade, accompanied by a choir.

“He had his albums but he was primarily known for singing one song at each Billy Graham service,” said Graham biographer William Martin. “That endeared him to everybody who went to his services or who saw them on the broadcasts for all those years.”

Shea, who won his first Grammy in 1965 and was a 10-time nominee, recorded more than 70 albums of hymns. He was inducted into the Religious Broadcasting Hall of Fame in 1996, and the “Hall of Faith” of the Conference of Southern Baptist Evangelists in 2008.

Shea’s love for music shone through in the RNS interview, with his deep voice sometimes drifting into song as he discussed the range of hymns featured in his book “How Sweet the Sound: Amazing Stories and Grace-filled Reflections on Beloved Hymns and Gospel Songs.”

He also put down the phone and played a few notes for a listening reporter on his 800-pipe, three-manual organ in his home. 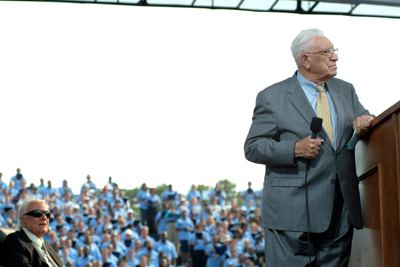 In the same book, he recalled the Graham crusades’ unofficial anthem, “Just As I Am,” and a harrowing flight out of Newark, N.J., in 2000 when he wasn’t sure if he would ever touch the ground again.

Clutching his wife’s hand, he started to pray the text of the hymn. “If this was our time to meet the Savior,” Shea wrote, “that’s the song I wanted to be singing.”

Born in Winchester, Ontario, Shea was raised on church music, with his mother singing it as he awoke on school days. He took the bass line around the dinner table when his family sang the Doxology — beginning with the words “Praise God from whom all blessing flow” — in harmony. As his father preached in their Houghton, N.Y., church, he would flip through the pages of the church hymnal.

“The rustle of the pages might have been a little distracting, but I know he forgave me,” Shea wrote in his book. 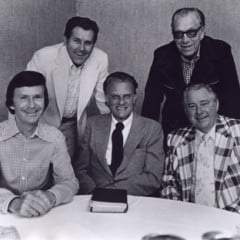 Veteran members of the Billy Graham team who were with the evangelist during his 1952 campaign in Jackson, Miss., pause for a visit before beginning their 1975 Mississippi Crusade. (From left to right) Tedd Smith, pianist; Cliff Barrows, song leader and program director; Graham; George Beverly Shea, soloist; and Grady Wilson, associate evangelist. Religion News Service file photo. 1975

At age 23, he wrote the song “I’d Rather Have Jesus,” which became another staple of Graham crusades. A few years later, the song’s message inspired him to decline an offer to sing with a secular singing group.

Franklin Graham, who succeeded his father as the president of the Billy Graham Evangelistic Association, recalled how “unassuming” the musician was.

“Even though Bev was 10 years older than my father, he never acted his age,” said Franklin Graham. “He was absolute fun to be with.”

In 2004, when he was sidelined by a heart attack, Shea had to miss Graham’s evangelistic event in Kansas City, Mo. It was the first time in 57 years that he had missed a crusade.

One of his last public appearances with Graham was in 2010, when the ministry celebrated its 60th anniversary, Ross said. 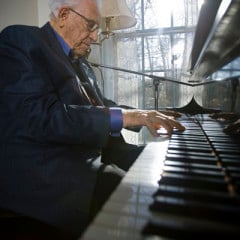 Grammy-winning gospel singer George Beverly Shea (pictured here playing the piano in 2008) has died at 104 – a life as full as it was long for the man behind the booming voice that for decades rang out at Billy Graham’s crusades, and then years after Graham stopped holding big public events. Photo courtesy Billy Graham Evangelistic Association

Even in his later years, Shea awed listeners with his continuing ability to sing his signature songs. Martin heard him sing in Dallas in 2002, when he would have been 93.

“I commented on how remarkable it was,” Martin recalled, “and he said, ‘I think I sounded better when I was 90.’”

(Kevin Eckstrom contributed to this report.)