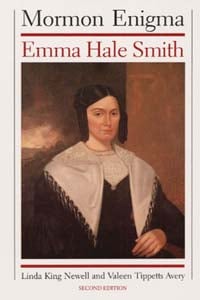 Emma’s role in Mormon history is as enigmatic as ever.

This weekend at the Midwest Pilgrims retreat in Nauvoo, Illinois, I had the opportunity to listen to a fascinating talk by Linda King Newell, co-biographer of Emma Smith, first wife of LDS founding prophet Joseph Smith, Jr.

In 1984, Linda wrote, with Valeen Tippetts Avery, Mormon Enigma: Emma Hale Smith, which has stood for nearly three decades as the definitive biography of Emma. Until that time, Emma had been largely written out of official LDS history. When the two authors began piecing together Emma’s life, there was only one small manila folder about her in the entire LDS Archives.

One of the materials in it was a pamphlet that said Emma could be forgiven for her sins because she had lost her mind. One of the other items was a photograph of a family member that was mislabeled as being Emma.

So, what materials that existed were unfair or inaccurate. Emma had been disappeared. Why?

We all use history to suit our purposes, and Emma simply did not suit the purposes of the LDS Church in the years following her husband’s death.

It was that she hated polygamy and flatly refused to countenance its presence among the Mormon people.

Emma’s disappearance from LDS history was so total that Linda says when she and Valeen co-authored an article about her for the Ensign in 1979, it was the first writing about her to appear in any official church publication in 113 years.

It’s a beautiful article, but it’s not a fully honest one; polygamy is not mentioned once anywhere. That’s likely why its content was acceptable for the Ensign nearly a century after the Church had begun distancing itself from polygamy.

The biography Linda and Valeen published with Doubleday several years later was not so guarded, detailing Joseph’s many polygamous alliances, his repeated lies to Emma about those marriages, and her conflicts with his plural wives—including a much-debated stair-pushing catfight with Eliza R. Snow. It’s an outstanding and award-winning biography that was the product of countless hours of primary research.

The biography was an instant commercial success, selling out its first two printings. At the time of the third printing, however, Val’s bishop received a call from a higher-up in Salt Lake who said that “two girls” had written a book about Emma Smith and were not to be invited to speak about the topic in sacrament meetings. When pressed, Linda’s bishop admitted he had received a similar call. The authors were alarmed, though Linda was comforted by her stake president, who told her, “You are my parishioner, and I will see you through this no matter how long it takes.”

It turned out that such calls had gone out to bishops and stake presidents in several states. Within three weeks, the press got wind of the authors’ ecclesiastical silencing and began to report about it—thereby tripling sales of the book.

Linda requested and was granted a meeting with some general authorities, including Dallin Oaks, to discuss the ban and discover what aspects of the book had been found objectionable. When asked if he had read the biography, Elder Oaks said he had seen several excerpts from it, and found that the authors’ views of Joseph Smith were “nontraditional.”

Nontraditional. Which is another way of saying that a particular view of history does not suit institutional needs in the moment. In the past three decades, there has been more published about Emma Smith in official church channels, including the new Daughters in My Kingdom manual, which mentions her very positively as the founder of the Relief Society, and the Gospel Doctrine manual for church history, which holds her up as an example—somewhat reproachfully—of how to support one’s spouse.

It’s an improvement that she’s discussed at all. But the way Emma’s story is carefully sculpted reveals as much about gender expectations and religious norms in our own era as it did when Brigham Young declared her mormona non grata. For example, in the support materials for the Joseph Smith manual, polygamy is once again nowhere mentioned. If that were the only document people used to learn about Joseph Smith and his life, they would naturally assume that he was married once, to Emma, and not to approximately three dozen other women.

The way that current materials deal with the conflict with Brigham Young is . . . to ignore it entirely. According to the official narrative, Emma stayed behind in Nauvoo rather than joining the majority of the Saints in Utah because she was a widow caring for five young children and Joseph’s aging mother, not because she believed that, as she expressed it at the time, “the Twelve have made bogus of it.”

Although she never lost her faith in the Mormon religion and in the sacred nature of the Book of Mormon, she had no testimony of Brigham Young and other polygamous LDS leaders.

What’s especially interesting to me about the unfolding historiography of Emma Smith is that she herself would have been happy with the disappearance of polygamy and Joseph’s other wives from Mormonism’s official party line. This was exactly what she had tried to institute herself as a theological agent in her own right, so much so that when the Reorganization was founded in the 1860s she declared that Joseph had never been married to anyone but herself. Emma knew better, but she also knew that a polygamous history would not serve her needs.

In a remarkable twist of irony, her version of history is increasingly the LDS Church’s as well.