WATERTOWN, Mass. (RNS) People in this heavily Armenian community are casting doubt on claims by relatives of the Boston Marathon bombing suspect that an Armenian convert to Islam was somehow at fault.

“For an Armenian to convert to Islam is like finding a unicorn in a field,” said Nerses Zurabyan, 32, an information technology director who lives in nearby Cambridge. “It would be such a shock to the Armenian community that everyone would know this person.” 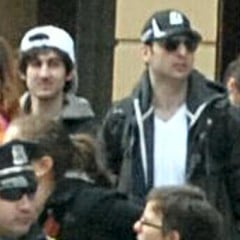 A photo released by the FBI shows Boston Marathon bombing suspects Dzokar Tsarnaev, left, and his brother Tamerlan Tsarnaev, right, before the explosions.

The Associated Press reported Tuesday (April 23) that relatives of Tamerlan Tsarnaev, the older of the two suspects, say he came under the influence of a man named Misha who preached to him in his kitchen and turned him to a radical form of Islam.

Tsarnaev’s uncle in Maryland, Ruslan Tsarni, and his former brother-in-law in Kazakhstan, Elmirza Khozhugov, said the man was an Armenian convert who was heavyset, bald, around 30, and had a long reddish beard.

Tsarni told USA Today that Tamerlan Tsarnaev and his younger brother Dzhokhar acclimated easily to America, grew up in a close family, and had a happy childhood filled with Chechnyan and American traditions, he said.

Tsarni, 42, is the brother of the boys’ father, and defended his brother as a hard worker who tried to stop his wife from inviting the radical “Misha” into their home.

In 2007, Tsarni had a falling out with the Tsarnaev brothers and their mother.

During that time Tsarni said the boys’ father told him “Misha” began visiting the family’s small Cambridge apartment. The man would stay past midnight and talk to the family about Islam. When the Tsarnaevs’ father would object, the wife would brush him off, Tsarni said.

“Misha” told Tamerlan Tsarnaev that sports, music and school were unimportant and instead stressed a radical version of Islam, Tsarni said.

“A person came inside their house, and a parent supported it,” Tsarni said of the radicalization of his nephews. “My brother would just leave the house and come back 20 hours later. He was a mechanic and worked hard. He loved America.”

Back in Watertown, Zurabyan and a couple hundred of others gathered outside St. Stephen’s Armenian Apostolic Church on Wednesday to commemorate 98 years since the start of the conflict that Armenians recall as a genocide by Ottoman Turks that belongs in the same category as the Holocaust. Before it was over, 1.5 million Armenians died. Turkey denies that it was a deliberate extermination.

In 301 A.D., Armenia became the first nation to adopt Christianity as the state religion.

“Our identity and our faith are so intertwined to our traditions that we don’t distinguish between one and the other,” Zurabyan said. Over the centuries, as Islam became dominant in the region, Armenians suffered several massacres, he said, “but even in the face of extinction, did not convert.”

To Chris Hajian, 39, a financial analyst from Waltham, the Misha story sounded like a fabrication.

“It’s a little suspicious, with all the conspiracy theories they’ve come up with,” Hajian said, referring to reports that the Tsarnaevs’ mother said her sons were set up by the FBI and 9/11 was an attack by the U.S. government on its own people. “And now they’re looking to blame someone else.”

News
Normally a refuge on campus, college Muslim groups fight students’ isolation in a pandemic
News
Activists to hold protest rally after reports of ICE officials forcing Muslim detainees to eat pork
News
600 faith leaders sign letter urging California governor to stop transfer of incarcerated people to ICE
Islam Beyond Phobia
On Ashura, Muslims recall how faith in God overcomes tyrants
Opinion
To beat Trump, the ‘good Muslim, bad Muslim’ messaging has to end
© Copyright 2020, Religion News Service. All rights reserved. Use of and/or registration on any portion of this site constitutes acceptance of our User Agreement and Privacy Policy, Privacy Statement and Cookie Notice. The material on this site may not be reproduced, distributed, transmitted, cached or otherwise used, except with the prior written permission of Religion News Service.