(RNS) John Paulk, who for years was known as the poster boy for the Christian “ex-gay” movement, has formally renounced his past and says he is “truly, truly sorry for the pain I have caused” in preaching that gays and lesbians could become straight through prayer and counseling. 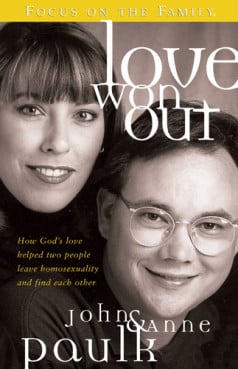 In a series of rapid developments over recent days, Paulk also said in a statement on Wednesday (April 24) that his 20-year marriage to his wife Anne, who describes herself as an ex-lesbian, is ending.

“Please allow me to be clear: I do not believe that reparative therapy changes sexual orientation; in fact, it does great harm to many people,” Paulk said in a lengthy apology distributed to various gay publications.

“From the bottom of my heart I wish I could take back my words and actions that caused anger, depression, guilt and hopelessness. In their place I want to extend love, hope, tenderness, joy and the truth that gay people are loved by God,” he said.

“Today, I see LGBT people for who they are — beloved, cherished children of God. I offer my most sincere and heartfelt apology to men, women, and especially children and teens who felt unlovable, unworthy, shamed or thrown away by God or the church.”

Paulk is the former chairman of Exodus International, a Christian ministry that was devoted to what is called “reparative therapy” by supporters and derided as the “pray away the gay” movement by critics. Paulk’s troubles with the ministry began when he was spotted at a gay bar in Washington in September 2000, and he eventually left the ex-gay movement in 2003.

Since then, the reparative therapy field has steadily crumbled under the weight of scandals, defections, and a growing body of research that has undermined its basic claims.

After his 2003 departure from an ex-gay ministry affiliated with Focus on the Family, Paulk remained married to his wife and the couple started a catering business in Portland, Ore., which included a number of clients in the city’s gay community.

An April 18 story in PQ Monthly, a local gay magazine, revealed that Paulk was frequenting gay bars in the city and had gay clients. He was challenged to formally renounce his past and apologize, which he had never done. Paulk was quoted as saying he had refrained from taking that step to protect the couple’s three sons, and he indicated that only in recent years has he come to accept his own sexuality.

Still, Paulk was criticized for not going further in expressing repentance, and on Wednesday (April 24) he issued his formal apology.

Paulk, who co-wrote the book “Love Won Out: How God’s Love Helped Two People Leave Homosexuality and Find Each Other,” with his wife, also said people should not buy or promote his past writings.

Anne Paulk responded by issuing her own statement through the Restored Hope Network — a Christian ministry that seeks to change sexual orientation through faith and counseling — acknowledging that the couple is divorcing. But she stood by her views.

“His conclusions and mine are very different in key ways,” she said of her husband. “Christ is still at work changing lives into conformity with God’s will expressed in the Bible.”

In his statement Paulk said he wants “to take the time to make sure my next actions come from a place of truth and authenticity.” He said he would be “drastically limiting my public engagement until my own personal life can be settled. After that I eagerly anticipate giving back to the community.”