BIRMINGHAM, Ala. (RNS) In May 1963, thousands of Birmingham school children faced police dogs, fire hoses and possible arrest to demonstrate against segregation. Now, 50 years later, those who were part of what became known as the “Children’s March” say they don’t want their story to be forgotten.

“We were doing this not just for ourselves but for some higher purpose,” said one of the young marchers, Freeman Hrabowski III. “It focused on civil rights for all Americans.”

Hrabowski is now president of the University of Maryland, Baltimore County. He was 12 when he marched in Birmingham and was arrested for parading without a permit. He and hundreds of other children were held in custody for five days before being released.

Experts say the children’s crusade helped galvanize the civil rights struggle at a time when efforts were flagging.

“That was really the tipping point in a tipping year,” Pulitzer Prize-winning author Taylor Branch, who has written a series of books about the civil rights movement, told the PBS program “Religion & Ethics NewsWeekly.”

In 1963, Birmingham was considered the heart of the segregated South. The Rev. Martin Luther King, Jr. arrived in January 1963 to support local efforts to end segregation through nonviolent protests. The campaign did not live up to his expectations.

“He prepared for three months and started the demonstrations in April. They fizzled quickly, nothing went according to plan,” Branch said.

As King struggled to convince adults to march and get arrested, civil rights leaders including the Rev. James Bevel and Dorothy Cotton were holding special meetings for Birmingham elementary and high school students.

“We knew that they were curious about what was going on in their town,” Cotton said. “They just started hanging around … and it swelled.”

As King considered a retreat from Birmingham, Branch said, “the people running the children’s workshops said … ‘(we’ve) got plenty of foot soldiers.’” 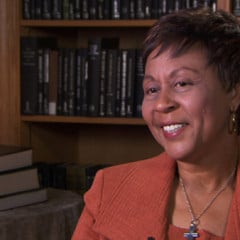 The Rev. Carolyn McKinstry was 14 when she learned about plans for young people to march. She didn’t tell her parents because she knew they wouldn’t let her go. Photo courtesy Religion & Ethics Newsweekly

The idea of putting children on the front lines was controversial. Movement leaders argued among themselves about whether this was the right strategy.

“Dr. King was severely criticized for allowing the children to be involved, but the children insisted themselves,” said the Rev. Virgil Wood, a longtime King associate. “The children were the self-initiators of their own freedom.”

The Rev. Carolyn McKinstry was 14 when she learned about plans for young people to march. She didn’t tell her parents because she knew they wouldn’t let her go.

“It was such an excitement in the air,” she said. “I knew I wanted to be part of it.”

McKinstry said before they could march, the young people were trained about the importance of nonviolence.

“We were told what to expect when we marched, if we did encounter the police. They might hit you, they might spit on you, they will have dogs and billy clubs but the only appropriate response ever is no response, or a prayerful response,” she said. “Faith was very much a part of what we were doing.”

On May 2, students left their classrooms midday and gathered in Sixteenth Street Baptist Church. They came out marching and singing, row after row, some as young as 6 years old. Nearly a thousand students had signed up to march, and more than 600 were taken into custody on that day. 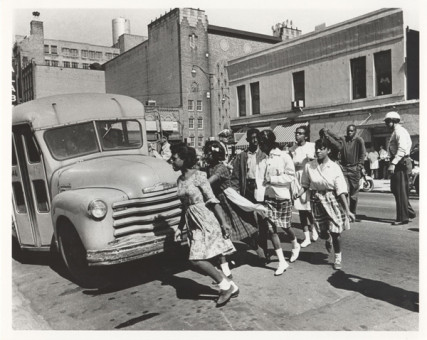 In May 1963, thousands of Birmingham school children faced police dogs, fire hoses and possible arrest to demonstrate against segregation. Now, 50 years later, those who were part of what became known as the “Children’s March” say they don’t want their story to be forgotten. Photo courtesy Birmingham Civil Rights Institute

As hundreds more children showed up to demonstrate and face possible arrest, Birmingham police commissioner Eugene “Bull” Connor was anxious to restore order. He instructed his forces to bring out the fire hoses and the police dogs. Some of the most shocking confrontations happened in Kelly Ingram Park, where officials turned the water hoses against the marching children.

“The water came out with such tremendous pressure, and it’s a very painful experience,” McKinstry said. “I got knocked down, and then we found ourselves crouching together and trying to find something to hold onto.”

The police also used dogs to try to control the crowd gathering in the park. News reporters captured images of young people being attacked by the German shepherds. The marching, and the arrests, went on for several days. Energized by the children, adults soon joined in.

Hrabowski was in a group of children who marched to City Hall on the second day of the demonstrations. At City Hall, Hrabowski was confronted by Connor, who asked him what they wanted.

“‘We want to kneel and pray for our freedom.’ That’s all I said,” Hrabowski recalled. Connor picked him up, spit in his face and then arrested him.

Hrabowski said he was held in crowded conditions with children even younger than he was. At one point, they were allowed a visit from their parents and King. 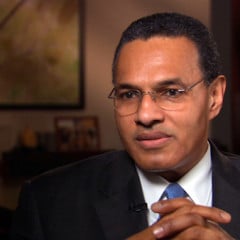 “We were doing this not just for ourselves but for some higher purpose,” said one of the young marchers, Freeman Hrabowski III (pictured here). “It focused on civil rights for all Americans.” Photo courtesy Religion & Ethics Newsweekly

Americans were transfixed by the news reports and pictures coming out of Birmingham, and the movement turned a corner.

“Millions of Americans who had been seeing demonstrations for years and saying, ‘Well, there’s something wrong about that and we should do something but it’s not for me, it’s for somebody else,’ that broke down those emotional barriers,” he said. “When they saw those children suffering … millions of people said, ‘I need to do something about this.’”

Concerned about the image of their city, white leaders negotiated a plan to start ending segregation. And on June 11, citing the events in Birmingham, President John F. Kennedy announced his intention to introduce new federal civil rights legislation.

“It led me to believe, especially after the laws were changed,” said McKinstry, “that there were many things that were worth fighting for.”

(A version of this story was first broadcast on the PBS program “Religion & Ethics NewsWeekly.”)

Black Protestants
‘Fifth Little Girl’ of 1963 Klan bombing reunites with nurse
Follow us on Facebook!
Submit your photos to RNS