BELFAST, Northern Ireland (RNS) When the Republic of Ireland apologized to the wayward girls who were sent to the Magdalene laundries for hard work and no pay, Teresa Bell felt encouraged. Surely, she thought, the government of Northern Ireland would do the same. 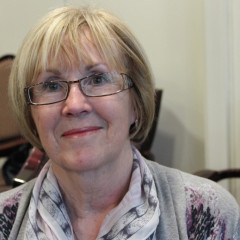 When the Republic of Ireland apologized to the wayward girls who were sent to the Magdalene laundries for hard work and no pay, Teresa Bell felt encouraged. Surely, she thought, the government of Northern Ireland would do the same. Photo by Paige Brettingen

Bell was one of thousands of young girls who were sent to the Magdalene workhouses run by Roman Catholic nuns when she got pregnant at age 16. She worked long hours washing clothes with no pay and little rest; after giving birth, her daughter was put in an orphanage.

Bell never recovered from the shame.

“I felt I was beneath everybody for 40 years,” she said. “It was only when I got a little older that it eased off a little bit.”

Bell kept quiet until Magdalene victims in the Republic of Ireland sparked international attention in February, demanding the government apologize for the laundries’ practices of forced unpaid labor and psychological abuse.

Though Bell shares many of the same painful memories as those in the Irish Republic, she and victims in Northern Ireland — which is part of the United Kingdom — haven’t received the same apology, and it remains uncertain if they ever will.

In the Irish Republic, an estimated 10,000 girls were locked up in laundries run by the Catholic Church between 1922 and 1996, according to an inquiry report published in February. The report acknowledged that in addition to Ireland, laundries existed in Northern Ireland, the United Kingdom, Europe, Australia, Canada and the United States. While the majority were Catholic-operated, Protestant institutions also existed.

“The Magdalene Sisters,” a film released in 2002, was one of the first to draw attention to the laundries. The majority of victims said they did not experience the same sexual or physical abuse as depicted in the movie. But the report did acknowledge that the “overwhelming majority” of victims described verbal abuse and “being the victim of unkind or hurtful taunting and belittling comments.”

Reasons for the forced labor ranged from minor offenses, such as skipping a train fare, to out-of-wedlock pregnancies. Some women entered voluntarily, seeing the laundries as a better option than homelessness. About 900 women, including one as young as 15, died in Ireland’s laundries.

The Republic of Ireland launched an investigation of the laundries in 2011 after pressure from victims intensified and the United Nations Committee Against Torture took notice, says Patrick Corrigan, director of Amnesty International in Belfast. The outrage in the Irish Republic has since found its way to the North. “It spilled across the border with people saying, ‘My experience was just like that. Why is my government not responding? Where is my inquiry?'” Corrigan said.

The government’s tense relationship with the Catholic Church in the North is one reason for the delayed response. Northern Ireland is mostly Protestant, while the government in the Irish Republic had stronger ties to the Catholic Church. According to the inquiry, the Republic of Ireland was directly involved in sending one in four women to the workhouses.

Another reason for the delayed response in the North is the cost.

“It’s shameful we haven’t done more investigation in Northern Ireland and it comes down to funding,” said William Crawley, a BBC journalist who covers religion in Belfast.

The Historical Institutional Abuse Act, an inquiry into residential institutional abuse between 1945 and 1995, is underway in Northern Ireland and will be completed in January 2016. Since it is only considering victims who suffered abuse under the age of 18 during that 50-year span, it excludes many of the Magdalene victims.

Financial restitution and criminal charges will be sought, says Corrigan, but what’s most needed is an apology.

“The victims carried this stigma for so many years,” he said. “But the stigma should be on everyone’s shoulders that we let this happen.”

Victims of similar abuse have also mobilized to increase pressure on the government in the North to include the Magdalenes.

Margaret McGuckin is a victim of institutional abuse. She talks about living in fear of the next beating and being forced to scrub the floors, windows and walls of a Belfast orphanage that was also run by Catholic nuns.

When she heard the outrage expressed by Magdalene victims in the Irish Republic, she saw an opportunity for those in the North to join her group, Survivors and Victims of Institutional Abuse. 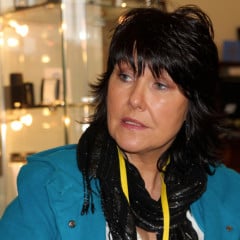 Margaret McGuckin is a victim of institutional abuse. She talks about living in fear of the next beating and being forced to scrub the floors, windows and walls of a Belfast orphanage that was also run by Catholic nuns. Photo by Megan O’Neil

Finding Magdalene victims in the North has been a challenge. Bell was one of the first to join McGuckin’s group; the extra support has been integral to maintaining their momentum.

Corrigan estimates that there are likely hundreds more Magdalene survivors in the North who are still alive, but he also recognizes it will take time for them to come forward.

“For four years we’ve been trying and they’re only coming out now,” he said. “A whole lot of them don’t want to talk because their families don’t know.”

Bell, who lives in a small village in County Down, 17 miles south of Belfast, shared her story with her four children, including her firstborn, Teri.

As soon as Bell turned 18 and could marry, she and her husband retrieved 10-month-old Teri from an orphanage. Bell says that wasn’t the case for most pregnant girls in the laundries whose babies were sent to families in Australia or the U.S.

Bell is also thankful that her husband — who died eight years ago — is no longer the only one who knows this dark part of her past.

“The fact that it’s made me tell my children has been good,” she said, “because if the victims never spoke out in the Republic, I wouldn’t have.”