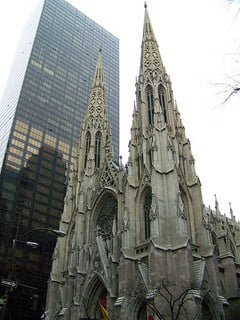 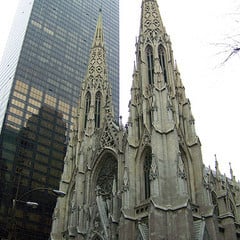 Update: Amodeo wrote about today's experience at The Huffington Post:

It was at this moment that Mr. Donohue advised us that if we entered St. Patrick's Cathedral with dirty hands, we would be arrested and charged with criminal trespassing. Upon hearing those words, I remember standing there thinking, "How can I be charged with criminal trespassing in my own home?" It was then that I realized what it meant to be spiritually homeless. This realization was particularly difficult for me in light of the private meeting that I had with Cardinal Dolan on November 27, 2012, at his office in Manhattan. It was during that meeting that he expressed such love and welcome that I find his subsequent "conditional welcome" to be difficult to understand.

A group of LGBT Catholics and their allies will attend the 10:15AM Mass at St. Patrick’s Cathedral in New York on Sunday with a unique visual marker: their hands will be covered in charcoal. Their purpose? Responding visually to a blog post the archbishop of New York, Cardinal Timothy Dolan, penned last week in which, they say, LGBT people were called dirty and compared to alcoholics.

I spoke to Joseph Amodeo, an organizer of the event, who said he felt like a victim of “spiritual bullying” after reading Dolan’s post. The Cardinal, who is also president of the US Conference of Catholic Bishops, relayed a story from his childhood, describing how his parents welcomed a playmate to stay for supper, but only after washing up, per house rules. Dolan was attempting to explain how the Catholic Church welcomes all people, but with certain conditions. Regarding LGBT Catholics, he wrote:

The Church loves, welcomes, and respects a woman or man with a same-sex attraction…while reminding him or her of our clear teaching that, while the condition of homosexuality is no sin at all, still, God’s teaching is clear that sexual acts are reserved for a man and woman united in the lifelong, life-giving, faithful, loving bond of marriage.

“I don’t see where he actually said ‘you’re welcome.’ It’s always with an asterisk, which is not a welcome at all,” Amodeo said. “We, as gay Catholics, are homeless in a spiritual sense and we’re seeking a home. It’s the ‘welcome, but’ that’s hurting people.”

He said that while a change in Catholic theology about homosexuality remains a dream, he and fellow organizers, including Nicholas Coppola, a gay man who made headlines last month after his bishop removed him from lay parish ministry, “want the Cardinal to see we’re not an oversexed population, but people of God just as committed to our church as others. The goal is to have the church see us, to listen to us. There’s a lack of understanding about who we are as gay people.”

Francis DeBernadro, executive director of New Ways Ministry, agreed with Amodeo, writing on his blog, "I don’t know about you, but I don’t find this notion to be welcoming at all. I find it condescending."

The protest comes in the wake of comments made by Most Rev. Thomas Tobin, the bishop of Providence, who lamented Rhode Island’s recent same-sex marriage legalization. In a letter being described by some as divisive, Tobin called same-sex marriage a “serious regression in the public morality” of Rhode Island. He said the that Catholics are not “free to endorse or ignore immoral or destructive behavior.” Catholics attending same-sex ceremonies, he wrote, “might harm their relationship with God and cause significant scandal to others.”

Recent polls continue to show lay Catholics leading the pack when it comes to support for marriage equality.