NEW YORK (RNS) A Tony-nominated play that offered a controversial take on the Virgin Mary reflecting on her life held its final performance on Sunday (May 5), closing after only two weeks as poor ticket sales never matched high expectations. 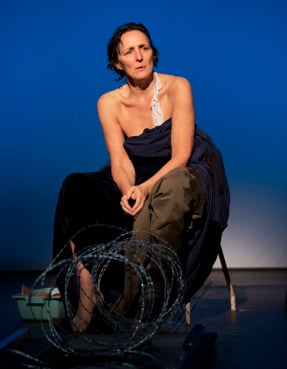 Now the question is: Why?

Shows fold on Broadway all the time, of course, and as The New York Times noted, just 25 percent of them ever show a profit. But was there something about “The Testament of Mary” that doomed it to failure?

After all, biblically themed shows are all the rage on television and especially on cable; the recent History Channel miniseries “The Bible” generated huge ratings, and a host of shows and films are trying to explore — and perhaps exploit — similar territory.

So what went wrong with “Mary”? In the quirky business of the theater, there are always many factors at work, and as Sarah Pulliam Bailey wrote in The Wall Street Journal last week, it is true that a number of religiously themed shows on Broadway have indeed tanked — Kathie Lee Gifford’s “Scandalous” among them, late last year — yet she also cited others that have done quite well.

When it comes to the success or failure of dramas about sacred Christian stories, however, the debate usually comes down to the question of whether the play was too controversial, or not controversial enough.

Critics of “The Testament of Mary” certainly thought the play, adapted from author Colm Toibin’s 2012 novel of the same title, was blasphemous because it imagined an aging Mary venting her anger about her son’s death and voicing her doubts about the stories his followers were telling about him.

So it was no surprise that the Catholic League’s Bill Donohue, who blasted the play when it opened, cheered its closing and chalked it up to a lack of reverence for the subject matter.

“Quite frankly, there aren’t enough people who want to spend their evenings watching a dark performance about a fanciful Virgin Mary who rejects the divinity of her son,” Donohue said.

On the other hand, beyond the Catholic League and a small knot of protesters outside the Walter Kerr Theatre, “The Testament of Mary” actually didn’t spark much in the way of protests — or the valuable buzz that comes with it.

Moreover, there are plenty of controversial shows about religion that do quite well on Broadway.

Exhibit A: the hit musical “Book of Mormon,” a barbed parody about Mormon missionaries that is still going strong on Broadway and on the road. And there was the award-winning play “Doubt,” which dealt with the clergy sex abuse scandal in the Catholic Church and was adapted into an equally acclaimed 2008 movie.

In fact, Toibin himself wondered whether his take on the Virgin Mary simply wasn’t sufficiently provocative. But in a post-mortem interview with The New York Times, the author said he refused to try to spark controversy just for the sake of ticket sales.

“I wanted this play to be a theatrical experience rather than a culture war over religion,” Toibin said. “You could have marketed the show to Catholics and others as ‘the most shocking thing you will ever see,’ and I’m glad we didn’t do that. It would have harmed the integrity of the production and performance. I think we have a right and a duty to put on good theater, and I think we did that.” 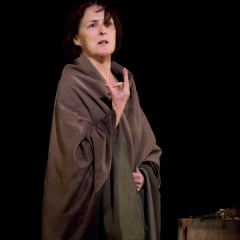 Whether it was good enough theater, in the end, may be the real issue. That’s what killed Gifford’s reimagining of pioneering evangelist Aimee Semple McPherson, which the Times called “generic and dull.”

Yes, “The Testament of Mary” garnered a Tony nomination for best play, but that came off almost as a consolation prize. And some critics, especially those with a theological bent, like Charles Austin of Religion News Service, did enjoy the religious speculations that the drama prompted.

Yet many others saw a theatrical mismatch between a finely tuned book and an overwrought play. “Stiff with its own seriousness, it’s a Broadway show that wants to impress us with its anti-Broadway intellectualism, while straining for a big, tricked-out success,” wrote The New Yorker’s Hilton Als. “One of the greater disappointments” of the Broadway season, agreed Ben Brantley of The New York Times.

In a telling moment at the end of “The Testament of Mary,” the mother of Christ, played by Fiona Shaw, wonders, simply, “Was it worth it?” Her stark answer: “No.”

In the theater world, such verdicts are hardly final, and coming seasons are likely to see plenty of other shows with religious themes — and maybe even enough controversy to keep the curtains up.