The Dalai Lama sports a University of Maryland visor as he delivers the annual Anwar Sadat Lecture for Peace at the university. RNS photo by Lauren Markoe
May 7, 2013
Lauren Markoe 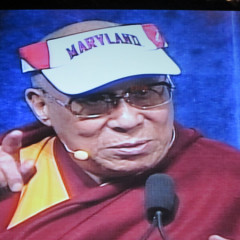 The Dalai Lama sports a University of Maryland visor as he delivers the annual Anwar Sadat Lecture for Peace at the university. RNS photo by Lauren Markoe

COLLEGE PARK, Md. (RNS) His English was terribly broken, and punctuated by sudden fits of giggles. But for nearly an hour, the Dalai Lama entranced an arena full of admirers, who said his message came across just fine.

The exiled spiritual leader of Tibet, speaking to an audience of 15,000 at the University of Maryland Tuesday (May 7), described himself as “a simple Buddhist monk” with a simple message: We are all human beings and should be good to one another.

“I look at you,” he said, surveying the crowd, a University of Maryland visor crowning his head. “All human beings. No differences.”

Who could disagree? But somehow, said those who had skipped class or work and endured long lines in the rain to hear him, the Dalai Lama delivered this stripped-down philosophy in a way that would stick with them, perhaps even change their lives.

The Dalai Lama imagined for the crowd a demilitarized world by the end of this century, said Edward Bartlett, a Baltimore real estate investor who was raised in the Baha'i faith and takes an interest in Buddhism.

“He’s just a simple Buddhist monk but in his presence I feel that contagious energy,” said Bartlett, 29. “I feel a world of peace, of compassion, is possible.”

The Dalai Lama also spoke about tolerance toward nonbelievers, and advocated for a secular ethics class for schoolchildren everywhere. 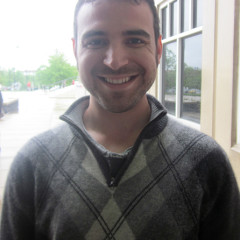 Scientists, philosophers and educators are already working on such a program, he said, noting that in the U.S., "secular" can have negative connotations.

But where he lives, "secular means respect all religions and also respect nonbeliever," said the Dalai Lama, who came to Maryland to deliver the annual Anwar Sadat Lecture for Peace, named for the Egyptian leader who made peace with Israel in 1979, and was killed by Islamic militants in 1981.

Sadat's widow, Jehan Sadat, co-hosted the lecture and sat near the Dalai Lama, who praised her husband's courage. Both Anwar Sadat and the Dalai Lama won the Nobel Peace Prize -- Sadat, with Israeli Prime Minister Menachem Begin, in 1978; the Dalai Lama in 1989.

The Dalai Lama, whose name is Tenzin Gyatso, is believed by Tibetan Buddhists to be the reincarnation of the 13th Dalai Lama, who held the position before him. He was born in a poor Tibetan village and has lived most of his 77 years in exile in India, where until two years ago he was head of the Tibetan government in exile.

Since the communist invasion in 1950, China has ruled Tibet. In the past few years, protests against Chinese rule have escalated, including the self-immolation of more than 100 Buddhist monks -- acts the Dalai Lama has tried to discourage.

The Dalai Lama came to Maryland as part of a six-city U.S. tour that will also bring him to Portland and Eugene, Ore.; Louisville; New Orleans; and Madison, Wis.

To the Maryland crowd, he spoke of fighting between Catholics and Protestants in Northern Ireland, and Sunni and Shiite Muslims, and prescribed compassion and forgiveness as the cure for conflict.

“All religious traditions carry same message, message of love, message of compassion, forgiveness ... that is the basis to develop mutual respect,” said the Dalai Lama, who called himself a student of all traditions.

Olka Forster, a senior at nearby Towson University who calls herself spiritual but doesn’t follow any particular religious tradition, said she appreciated that message, particularly the part about forgiveness.

“So much strife is caused when people just hold on to things,” she said. “It’s so important to let go of them.” 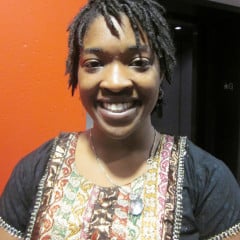 The Dalai Lama demonstrated such magnanimity when his academic hood, draped over him by the university’s marshal after he was presented an honorary doctorate, kept slipping from his shoulders. Some in the crowd laughed -- with him? At him? It seemed unclear.

But the Dalai Lama stole the joke for himself. “Too loose!” he cried, adjusting the unruly hood, and bursting into laughter so infectious that the whole arena erupted.

Equally composed was Maryland Gov. Martin O’Malley, in a post-speech receiving line, when the Dalai Lama suggested they rub noses. Magnified on giant screens throughout the arena, the governor smiled and leaned in for the nose-to-nose greeting.