CANTERBURY, England (RNS) England’s best-known cathedral and mother church of the 77 million-member worldwide Anglican Communion will stay open to the public despite the fact that two-thirds of the historic building is in urgent need of repair. 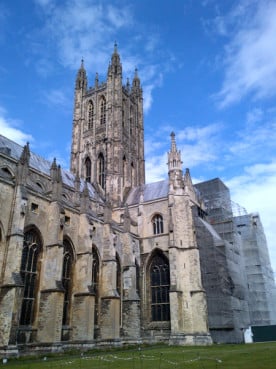 England’s best-known cathedral and mother church of the 77 million-member worldwide Anglican Communion will stay open to the public despite the fact that two-thirds of the historic building is in urgent need of repair. Photo by Trevor Grundy

The BBC reported on Sunday (May 12) that Canterbury Cathedral would soon close to visitors after it missed out on a 10.6 million pound ($16.2 million) request to the Heritage Lottery Fund for structural repairs. That report was dismissed on Monday as “greatly exaggerated” by cathedral spokesman Christopher Robinson.

“The Germans didn’t force us to close Canterbury Cathedral during the Second World War,” he said in an interview. “So there’s no chance it will be closed to visitors because we need to carry out some urgent repairs.”

The cathedral’s dean, Robert Willis, said cathedral leaders will need to examine why their bid failed before deciding whether to submit another request in November. “We remain committed to restoring the cathedral and to offering our many pilgrims and visitors a warm and rewarding experience,” he said.

Each year, more than a million pilgrims visit Canterbury Cathedral, which has stood on the same site about 60 miles southeast of London for 1,400 years. The landmark cathedral receives no support from either the British government or the Church of England, and is dependent on the generosity of individuals, trusts and foundations.

In 2006, the cathedral launched a campaign to raise 50 million pounds ($76 million), which raised more than 15 million pounds ($23 million) by 2011, said Andrew Edwards, chief executive of the Canterbury Cathedral Trust.