(RNS) Two years ago, radio evangelist Harold Camping was predicting the end of the world. Now, longtime aides say his false predictions are likely to result in the end of his California-based Family Radio ministry. 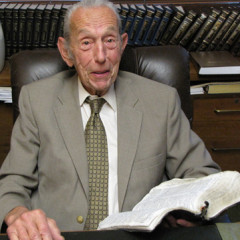 California radio evangelist Harold Camping said the world will end on May 21, 2011 — a figure he based, in part, on when he believes Noah entered the ark. Photo by Kimberly Winston

The Contra Costa Times reported that the ministry has sold its prominent stations and laid off veteran staffers, with net assets dropping from $135 million in 2007 to $29.2 million in 2011, according to tax records.

The newspaper said Family Radio has sold its three largest radio stations, and saw its cash on hand drop from $1.5 million to $282,880 in 2011. Since the incorrect prediction, donations have dropped 70 percent, ministry insiders told the newspaper. Records indicate the network took out a loan to keep going.

Camping, 91, predicted the Rapture would occur on May 21, 2011. A few days after that date, he said his calculations were off by five months.

In March 2012, he declared that his May prediction was “incorrect and sinful” and pronounced that his ministry would no longer predict when the world would end.

Matt Tuter, a longtime right-hand man to Camping who was fired last year, told the Contra Costa Times that he thinks the selling of the stations is the beginning of the end for the 55-year-old ministry.

“You eliminate those three (FM stations) and, ultimately, the rest of it dies,” he said. “I believe they are killing it off.”

But board member Tom Evans, who has handled operations since Camping had a stroke in June 2011, said the ministry is facing a tough economy like other nonprofits. He said Family Radio is not closing, is not in as dire straits as some allege and has a new mission in mind — comforting people affected by tragic events, from hurricanes to gun violence.

“We want to be a comfort and reminder of God’s strength and mercy,”  Evans told the newspaper. “In the end, our founding mission is to proclaim the word of God.”