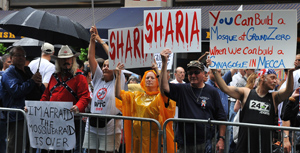 (RNS) When Oklahoma voters overwhelmingly approved a 2010 ballot measure that prohibits state courts from considering Islamic law, or Shariah, the Council of American-Islamic Relations filed a lawsuit within two days challenging the constitutionality of the measure, and won.

But when Oklahoma Gov. Mary Fallin signed a similar measure, one that its sponsor said would forbid Shariah, on April 19 of this year, no legal challenges were mounted.

The biggest difference is that the older bill -- and others like it -- singled out Islam and Shariah, but also raised concerns that they could affect Catholic canon law or Jewish law. Many early anti-Shariah bills also made references to international or foreign law, which worried businesses that the new bills would undermine contracts and trade with foreign companies.

The new bills, however, are more vague and mention only foreign laws, with no references to Shariah or Islam. They also make specific exceptions for international trade. All of that makes them harder to challenge as a violation of religious freedom.

“These bills don’t have any real-world effect. Their only purpose is to allow people to vilify Islam,” said Corey Saylor, CAIR’s legislative affairs director, of the more recent bills.

The change in language seems to have helped such bills advance in several states. And while these bills no longer single out Shariah, it is often understood that Shariah is the target, which many legislators make no secret of.

The driving force behind these new versions of anti-Shariah laws is "anti-Muslim bigotry plain and simple," said Daniel Mach of the American Civil Liberties Union, speaking on a panel in Washington Thursday (May 16). To those agitating for such measures, "Islam is the face of the enemy," he said.

To date, Oklahoma is the sixth state -- joining Arizona, Kansas, Louisiana, South Dakota, and Tennessee -- to adopt a law prohibiting courts from using foreign or international law, with some exceptions, in their decisions.

Despite the losses, David Yerushalmi, the Washington-based lawyer who drafted template legislation used for the anti-Shariah and anti-foreign law bills, said the anti-Shariah movement “is growing every day” and expects more states to adopt such bills in the future.

“People see the threat and also know that a bill that simply protects U.S. citizens and residents from constitutionally offensive foreign laws and judgments can only be a good thing,” Yerushalmi said.

But CAIR's Saylor said that victory may prove elusive for the anti-Shariah forces. By stripping all references to Islamic law, the anti-Shariah movement has failed to restrict Muslim religious rights. “In terms of substance, it’s already been beaten,” he said.

Nevertheless, some observers worry that even these watered-down bills could still be interpreted in ways that impinge on Muslims’ religious freedom.

For example, according to the Gavel to Gavel website that covers state legislatures, many of the new anti-foreign law bills specify that the prohibition on courts using foreign laws applies only to certain case types, such as family law or domestic relations. Shariah, as well as Jewish law, is widely used in these types of cases.

“While the foreign law bans are certainly less of a frontal assault on religious freedom than the anti-Shariah bills, they continue to raise concerns about bias towards minority faiths,” said Faiza Patel, co-director of the Liberty and National Security Program at the Brennan Center for Justice at New York University School of Law.

“The bans cast a cloud of uncertainty over a myriad of arrangements, including family and business-related matters, simply because they have foreign or religious origins.”

She added that some bans on foreign law seem to require judges to reject any foreign law or judgment that comes from a country that does not protect rights in the same way the United States does, even if the case being considered does not raise any rights concerns.

“This could deprive many Jewish and Muslim couples of a wide range of benefits -- lower tax rates, immigration benefits for foreign partners and the ability to make life-and-death decisions on behalf of each other in medical emergencies,” Patel said.

Even CAIR won’t rule out the possibility of future legal challenges.

“If someone tries to use these laws to undermine a person’s religious rights, we’re keeping all of our legal options on the table,” Saylor said.

(Lauren Markoe contributed to this report from Washington.)

Related Posts
By Suzan Fraser
Turkey’s president formally makes Hagia Sophia — a former cathedral — a mosque
By Shumaila Hemani
As a Sufi singer, I believe the sounds of world religions can cultivate compassion during COVID-19
By Mike Ghouse
President Erdogan, preserve Hagia Sophia as a church
By Alejandra Molina
In Los Angeles, Black Lives Matter activists and clergy denounce police brutality during George Floyd memorial service
By Shane Claiborne
Death in the middle of death: On the execution of Walter Barton