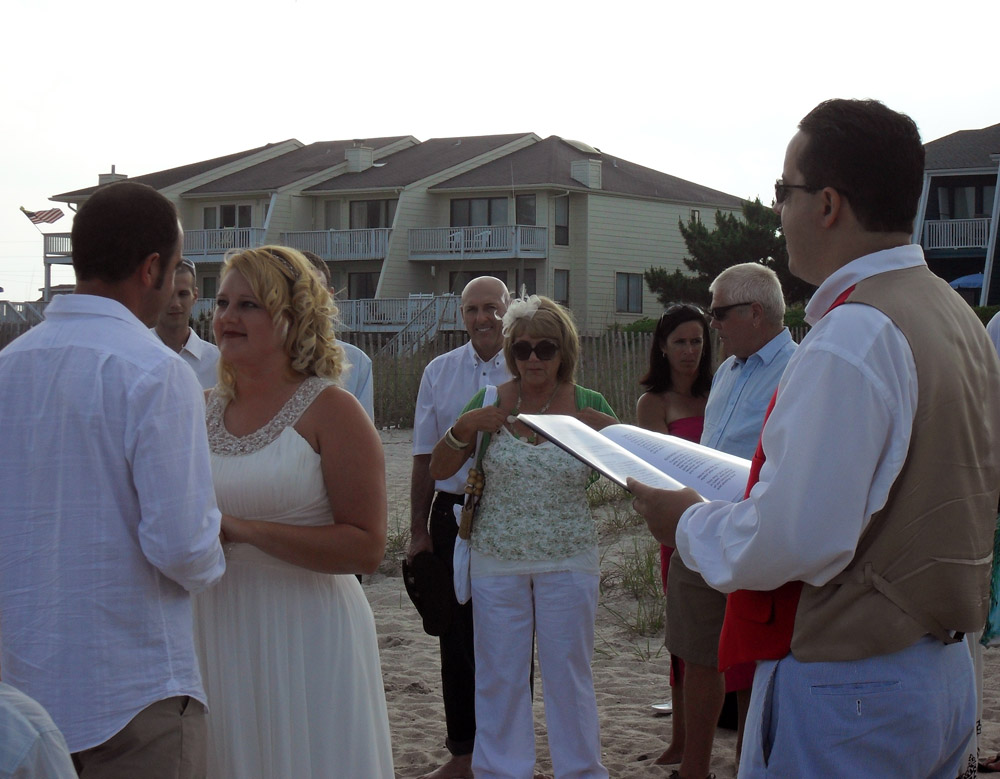 Han Hills, a humanist celebrant in Wilmington, NC, performs a wedding at Wrightsville Beach. Photo courtesy of Leap of Humanity
May 17, 2013
Amanda Greene 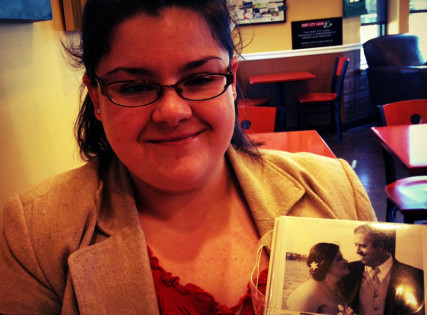 Amanda Holowaty of Leland, N.C., holds a photo of she and her husband Mike Holowaty on their wedding day in May 2012. They chose a humanist celebrant to match their atheist values. Photo by Amanda Greene/WilmingtonFAVS.com

When the Wilmington atheist couple decided to join their lives a year ago, they knew they wanted a secular wedding celebrant, but their families weren’t so sure.

Her family is Methodist and his is “generally spiritual.” And they worried about even telling Mike’s grandmother, who is Eastern Orthodox.

So they found a wedding celebrant ordained through the Humanist Society, Han Hills, who allowed their family members to read a spiritual poem.

“Nobody seemed to notice that we didn’t mention God,” Holowaty said. “People came up afterward and said it was one of the best weddings they’d seen.”

With the rise of the "nones" – the 20 percent of Americans without a religious affiliation – more couples are looking for wedding celebrants who don’t mind skipping God’s blessing of the ceremony altogether.

More national atheist and humanist agencies such as the Humanist Society and the Center for Inquiry are developing ordaining programs to establish nontheist ministers in most states to perform weddings and funerals. CFI began its certification program in 2009.

There are currently 138 celebrants listed as ordained through the Humanist Society, and some perform weddings in multiple states. The Center for Inquiry has 23 celebrants.

Because of the demand she’s seeing for marriage and funeral celebrants, Florida humanist writer and blogger Jennifer Hancock is considering writing a book about the secular approach to marriage.

What’s missing, she says, is advertising for leaders in the humanist community who can fulfill ceremonies for life cycle events. Only a handful of the ordained celebrants listed on the society's website also advertise their services on a personal page.

“As soon as you do the advertising, people are like yeah, I want that. When I got married, I was worried. I didn’t want any religious references in my wedding because I didn’t want to start out the most important relationship of my life with a lie,” Hancock said.

“Some of my most popular posts are about grief, marriage relationships and parenting. That’s all stuff that a traditional minister would help you with.”

The creative elements of a humanist wedding don’t differ much from a religious one. There are sand-mixing ceremonies, candle-lighting ceremonies and walking down an aisle in a white dress. Vows are typically written by the couples themselves, said Hills, whose company is called Leap of Humanity.

Hills already has eight weddings booked this year across North Carolina and is starting to book weddings for 2014. And he’s only been formally advertising his services for a few months.

“You need a certain personality to do this. If you’re mousy, and you can’t think in a crisis, this isn’t for you,” he said, laughing. “It’s the only job where you can look out and if you see old ladies crying, then you’re doing a good job. It’s an honor to be given this place of reverence.” 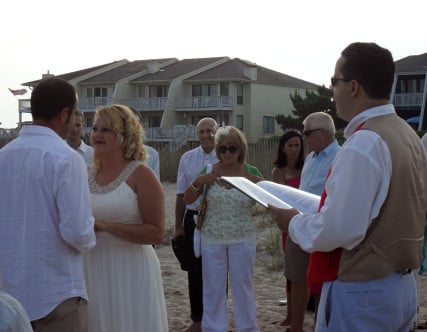 Han Hills, a humanist celebrant in Wilmington, NC, performs a wedding at Wrightsville Beach. Photo courtesy of Leap of Humanity

North Carolina’s celebrant numbers have grown to seven, while New York and California have the most, at about 20 each. But there are some states without any Humanist celebrants listed, such as Wyoming, West Virginia or Wisconsin.

Humanist Society program coordinator Sadie Rothman said she gets at least two requests for Humanist celebrant applications each month. But the process to become a celebrant requires five character references and training sessions.

Becoming a wedding celebrant outside of an established faith system can present legal challenges, depending on the state. In North Carolina, marriages performed through the online Universal Life Church before 1981 are considered valid. But the legality of ULC marriages after that date is in question, according to state marriage laws.

Because the Humanist Society is a religious nonprofit associated with the American Humanist Association, they are considered a valid marrying entity in the state. But Indiana Humanist celebrants certified through the Center for Inquiry lost a legal battle in December 2012 over the validity of the marriages they performed.

Mike Werner, past president of the American Humanist Association, said the demand for Humanist celebrants will grow to include traditional ordained ministers interested in officiating nontheist ceremonies.

Amanda and Mike Holawaty didn’t want to settle for a justice of the peace. They wanted to celebrate their values in a scenic wedding near the ocean.

“You see weddings in movies and on TV, the bride being given away and walking down the aisle,” she said. “It was really the same desire for us, just minus the religious aspect.”