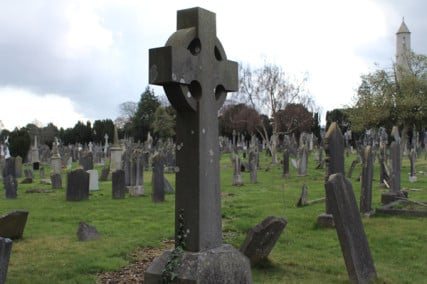 (RNS2-may21) A Patrician cross, Ireland's dominant religious symbols, marks a burial at Dublin's Glasnevin Cemetery. Glasnevin is home to one of the few crematoriums in Ireland and has seen a 50 percent increase in the number of cremations in the last decade, according to cemetery historian Shane MacThomais. Cremations are very popular among the growing class of Irish willing to observes life's milestones, including death, outside a church setting. Only about 30 percent of Catholics opt for cremation, according to MacThomais. For use with RNS-CATHOLIC-IRELAND, transmitted on May 21, 2013, Photo by Paresh Dave.