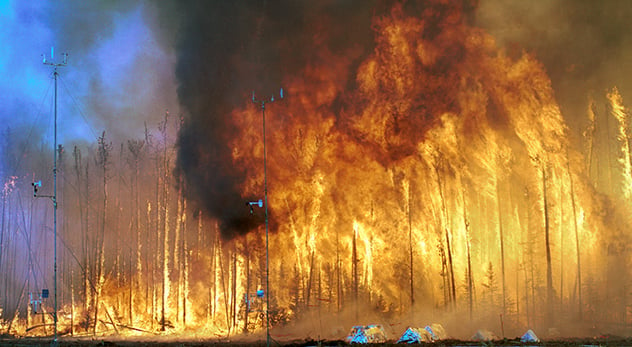 When I was a child, my grandfather burned trash in a heap out behind his house. I loved throwing old magazines and paper plates into the white-hot center, piece by piece. The once-colorful pages and flower-dotted discs disappeared into billowy smoke.

The experience is actually a lot like what many Christians’ believe will happen at the end of time. It’s the kind of theology espoused in the popular Left Behind book series that, according to a Baylor University study, more than half of conservative Protestants say they have read. And it’s a view supported by many evangelical pastors and theologians today.

This view has been called “throwaway theology” or “scorched earth theology.” But those phrases don’t seem to do justice to the perspective, why people believe it, or what difference it may make. So I decided to devote some time to exploring the issue.

Is God going to incinerate the Earth in an apocalyptic bonfire? And, if so, does it really matter?

The idea that God is going to burn up the Earth is not Biblically unfounded. It’s rooted primarily in the writings of the Apostle Peter:

“But the day of the Lord will come like a thief. The heavens will disappear with a roar; the elements will be destroyed by fire, and the earth and everything in it will be laid bare.”

What does Peter mean by “fire” and “laid bare”?

First, we note that the picture of fire in the Scripture is most often something that purifies rather than destroys. The presence of God and the Holy Spirit are associated with fire, for example, but this doesn’t mean that coming into contact with God will destroy you. Rather, It transforms you. It burns away the old creation to reveal the new creation in Christ.

Peter, who seems particularly interested in the image of fire, actually writes early in his first epistle that Jesus has given us a new birth to test the “genuineness of your faith—of greater worth than gold, which perishes even though refined by fire.” He may have been riffing on the Prophet Malachi who says more directly to our point: “But who can endure the day of his coming? Who can stand when he appears? For he will be like a refiner’s fire or a launderer’s soap. He will sit as a refiner and purifier of silver; he will purify the Levites and refine them like gold and silver.”

Peter, and Malachi before him, speak of a refiner’s fire whereby Christ burns away the impurities to leave only what is pure. He also compares this event to Noah’s flood, which didn’t destroy the Earth but cleansed it. So “to be laid bare” here does not mean to “burn up” or “incinerate.” This is what Peter explains when he writes, “Nevertheless we, according to His promise, look for new heavens and a new earth in which righteousness dwells.”

A new heavens and new earth is a space where all the impurities have been burned away and the creation—which God called “good” in Genesis 1—is purified to what God intended it to be. As N.T. Wright, perhaps the foremost living New Testament scholar, says in The Early Christian Letters for Everyone:

As with the rest of the New Testament, Peter is not saying that the present world of space, time and matter is going to be burnt up and destroyed. That is more like the view of ancient Stoicism – and of some modern ideas, too. What will happen, as many early Christian teachers said, is that some sort of ‘fire’, literal or metaphorical, will come upon the whole earth, not to destroy, but to test everything out, and to purify it by burning up everything that doesn’t meet the test. (119)

There are other reasons to think that Peter doesn’t teach what some evangelicals think he does, but suffice to say that I do not believe the world will be incinerated like my grandfather’s garbage. I believe the whole creation will be restored to the perfect state it was created in through a refinement process when Christ returns (see, for example, Paul’s teachings in Colossians 1). And I believe this because of the Bible, not in spite of it.

The Future “Fire” and Our Present Reality

So what difference does one’s view on the Earth’s final future really make? For some, it has a profound impact on one’s understanding of creation stewardship A few years ago, for example, I participated in a debate on creation care at a small Baptist college in the Southeast with an outspoken opponent of environmental care. At one point in the exchange, he grew frustrated with me, shrugged his shoulders, and said, “Well, it’s all going to burn up anyway.”

“If that is the case,” I said, “then would you be willing to walk outside this lecture hall and smoke a pack of cigarettes in front of all these attendees?”

“If everything is ultimately going to be destroyed—even you and your body—and according to you, that negates our responsibility in the meantime, then it doesn’t matter if you have a good smoke,” I said. “So I’ll pay for the pack of Camels.”

His comments and others who think like him seem to beg the question, “Why care about the future of an earth that has no future?” But my point in response was not lost on him or the audience. Something inside of him instinctively knew that the future of his physical body didn’t alter his responsibility to care for it in the present. In the same way, believing that the Earth will one day be destroyed, doesn’t release us from our present obligation to manage these properly in the interim. While believing that the physical world will end in an apocalyptic barbeque may cause some to avoid caring for creation, it shouldn’t.

Jesus was clear that those who follow him must love their neighbors. This love means we have to consider not only those who we borrow cups of sugar and leaf blowers from, but also our global neighbors around the world. And Jesus was also clear that we must care for “the least of these,” which include the poor and vulnerable around the globe who are most affected by environmental degradation. Even if there was no explicit command to care for creation–and there is–these exhortations would be enough. If we love the Creator and the Son He sent, we must care for the creation and those who depend on it.

One of Jesus’ most famous stories sheds a final beam of light on this issue. In Matthew 25, Jesus talks about a businessman who gives his servants some money and then heads out of town. Two servants cause the money to flourish and grow while a third buries it in the ground and goes about his business, never giving it a second thought. When the business owner returns from his journey, he comes to settle accounts. The ones that cared for what he left in their charge he rewards, and the one who ignored his responsibility was cursed.

When the Master returns one day, Jesus says, he will ask a very direct question: “What did you do with all the stuff I left in your care?”

No matter what happens to the Earth at the end of time—whether it is destroyed or refined—this question will need to be answered. And when it does, the Scripture says, the nations will be stirred up, the dead will be judged, and the time will come for God to “reward Your bond-servants the prophets and the saints and those who fear Your name, the small and the great, and to destroy those who destroy the earth.”

What we believe matters and what we do with those beliefs does too.