(RNS) Atheists and other nonbelievers largely welcomed Wednesday’s (May 22) remarks by Pope Francis that performing “good works” is not the exclusive domain of people of faith, but rather a place where they and atheists could and should meet.

In a private homily, Francis described doing good not as a matter of faith, but of “duty, it is an identity card that our Father has given to all of us, because he has made us in his image and likeness.”

Then, referring to non-Catholics and nonbelievers, he said, “if we do good to others, if we meet there, doing good, and we go slowly, gently, little by little, we will make that culture of encounter: we need that so much. We must meet one another doing good.”

Reaction among American nonbelievers ranged from mild surprise to warm welcome. Some say they see Francis’ remarks as a sign that nonbelief — atheism, humanism and other forms of freethought — is being normalized, while others see recognition of what they say they have known all along: Having no faith does not mean having no morality.

“We are a community that is just trying to do good and live good lives, just like most communities are,” said Greg Epstein, Harvard University’s Humanist chaplain and author of “Good Without God.” “His statement is an acknowledgment of that. It is welcome and it is gratifying.”

Epstein was struck by the contrast of Francis’ remarks and Tuesday’s broadcast of an interview by CNN’s Wolf Blitzer of an Oklahoma tornado victim. When Blitzer asked the woman if she wanted to thank God for her family’s survival, she replied she is an atheist.

“You have this small example of this soft-spoken young mother who is recovering from the tornado who by her presence, her quiet dignity, not only exemplified what the pope was saying, but overshadowed him,” Epstein said. “The quiet dignity of her just being a person and so clearly a good and loving person, it makes my reaction, and I would think a lot of people’s reaction (to Francis’ remarks), ‘Well, of course.’” 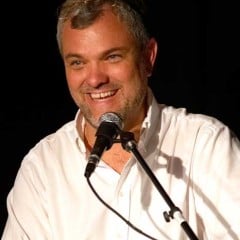 Dale McGowan is an author and executive director of Foundation Beyond Belief, a nontheistic charitable organization. He was recently enlisted to write “Atheism for Dummies,” the first book about nontheists from the “Dummies” series of books. RNS photo courtesy of Dale McGowan

“Anything that decreases the mistrust and fear between people is a good thing,” he said. “Some people might say it contradicts past statements (of other popes), but I don’t care about any of that. It is terrific when a position evolves to where we can put division behind us, and this is an example of that and I think it is great.”

D.J. Grothe, president of the James Randi Education Foundation, an organization of skeptics, said he hears echoes of the landmark Second Vatican Council (1962-1965) in Francis’ remarks. And while he takes issue with some policies of the Catholic Church — the promotion of miracles, the opposition to contraception — the pope’s address was nonetheless “refreshing.”

Francis’ predecessor, Benedict XVI, was a vocal opponent of secularism and unbelief, even as he approved a new initiative called “Courtyard of the Gentiles” to engage in dialogue with nonbelievers and linked arms with outspoken Italian journalist Oriana Fallaci, an atheist who saw trouble in the growth of European Islam.

“I don’t see that disdain for nonbelief that was so apparent before” in other popes, Grothe said. “He is really talking about what I would call humanism — the ethical approach to making the world a better place without recourse to supernatural beliefs.”

In the same homily, Francis said all people, “even the atheists,” are “redeemed” through “the Blood of Christ” — the Christian belief that the sins of humanity are wiped clean through the crucifixion of Jesus. The inclusion of atheists in a belief they do not share seemed to raise few hackles.

“He was using his own language and speaking from his own beliefs,” McGowan said, a statement echoed by others. “That is not the point. The point is he is saying, ‘I don’t fear you,’ and I think that is a lovely thing.”