ROME (RNS) Steps from the immense colonnade of St. Peter’s Square, Sarwar Jahan stood next to his souvenir stand. A dark, clean-shaven man wearing a navy blue jacket and a black knit cap, Jahan is one of the legions of peddlers selling trinkets of the new Pope Francis to tourists and pilgrims. 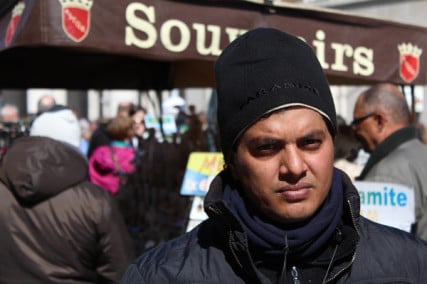 Sarwar Jahan, 26, a street souvenir merchant in Rome, is one of many Muslim immigrants to Italy. Photo courtesy Mustafa Hameed

Like many of his fellow street merchants, Jahan is neither a Catholic nor a natural-born Italian. He’s a Muslim who moved to Rome from Bangladesh in search of work.

In a country dominated by Roman Catholics, Muslims make up Italy’s second-largest religious group. A Pew study estimated that more than 1.5 million Muslims live in Italy, a number projected to double by 2030.

Though it has more adherents than several faiths with official status — including Buddhism, Hinduism and Judaism — Islam is not an officially recognized religion in Italy. Consequently, no Muslim organizations can receive funding through an Italian law that allows taxpayers to allocate a portion of their taxes to a religious group of their choice.

While negative views of Islam in this Catholic nation have played a part, the sheer size and diversity of Italy’s Muslim population may be among the biggest obstacles to the community’s recognition, said Mustafa Cenap Aydin, director of the Istituto Tevere in Rome, a group that promotes intercultural dialogue.

“The tiny Buddhist community, it’s not a challenge, you can recognize it,” Aydin said. “But (with Muslims) we’re talking about 1.5 million people.”

Aydin mentioned another hurdle to Muslim integration in Italy:  “Maybe 95 percent of Muslims are not citizens here,” he explained. That includes men like Jahan, who followed his brother to Rome two years ago in search of work.

“Muslims in Italy are facing the challenge of situating Islam in Italy,” said Abdel Latif Chalikandi, a lawyer and cultural mediator at the Mosque of Rome. “Are you a Muslim or an Italian?”

Chalikandi himself moved to Rome from Kerala, India, after meeting his wife, Sabrina Lei, a Catholic-born Italian convert to Islam who has translated the works of several Islamic writers into Italian. Together, the two are working to publish more books about Islam in Italy.

Making a new life in a new country is not easy. Besides new languages, there are new foods and new customs. Fulfilling Muslim religious requirements may also be difficult. 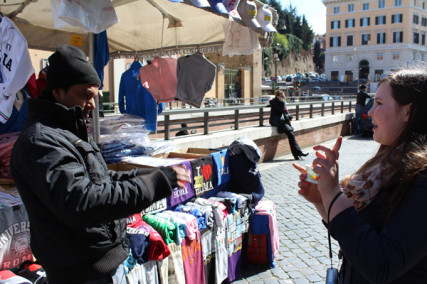 Sarwar Jahan, 26, sells souvenirs to a visitor in Rome. Jahan is one of many Muslim immigrants in the city who work as street vendors and peddlers. Photo courtesy Mustafa Hameed

He said religious obligations such as circumcision, Muslim-specific burial grounds and halal meats can pose problems for Italian Muslims. Food is a particularly sensitive issue among Italian Muslims who cannot eat pork or drink alcoholic beverages.

Still, the religious prohibition against eating pork has not deterred all Muslims. Sharif Ahmed is a waiter at a traditional Italian restaurant near Piazza Navona, across the Tiber River from the Vatican. A recent transplant from Delhi, India, he appeared at ease presenting plates of salami and prosciutto and pouring wine for customers. Ahmed said that he does not eat pork or drink alcohol.

But beyond dietary differences, darker sources of dissonance are often at work. Islamophobia is alive and well in the country, particularly among conservative politicians who blame the country’s economic woes on immigrants. In many circles, being Muslim is synonymous with being an immigrant.

But worse than brash politicians are forces within the Muslim community that put it at odds with Italian society, Aydin said. In 2009, a Moroccan immigrant murdered his 18-year-old daughter after he found her dating an older Italian man, reinforcing stereotypes of honor killings and misogyny.

“Weeks and weeks the Italian newspapers are talking about this tragic event,” Aydin said. “They’d pose questions in these terms: ‘What do you think about this Pakistani girl who was killed since she was dating an Italian guy?’”

Before Muslims can adopt an active role together, however, they must organize. “There is a crisis in Muslim leadership and knowledge,” said Chalikandi.

The Italian government has taken a number of steps in recent years to assimilate Muslims. In 2005, the Ministry of the Interior established the Council for Italian Islam to foster dialogue between the government and the Italian Muslim community. The council was meant to be an umbrella body coordinating the country’s various Islamic organizations. That would have provided the structure for Islam to be legally recognized as a religion eligible to receive tax money.

“The Italian state wanted to recognize the religion,” Chalikandi lamented, “but unfortunately, the Muslim organizations and leaders couldn’t get a consensus and they couldn’t sign that accord with the government.”

Despite the divisions, the Council for Italian Islam is still intact and could yet serve as a useful forum for the country’s various Islamic organizations.

Still, both Chalikandi and Aydin said efforts to organize the different groups representing the Islamic community of Italy may be a long-term project.

“Muslims are learning,” Chalikandi said. “And still for Islam there is no second or third generation here yet.”

“The main challenge for Muslims is, of course, they have to change their mentality,” he said. “The parents should be much more conscious and aware of the importance of education for the next generation. And actually I don’t see enough of that kind of consciousness about this.”