(RNS) With the release of their ninth annual report, members of the Hindu American Foundation are pushing policymakers to take action against international human rights violations directed at Hindus.

The four countries the report categorized as egregious violators — Afghanistan, Bangladesh, Malaysia and Pakistan — are all Muslim-majority countries. 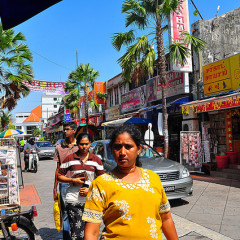 Samir Kalra, author of the report, titled “Hindus in South Asia and the Diaspora: A Survey of Human Rights” said the foundation included countries in which the plight of Hindus is largely overlooked. The impact of the report, he said, is twofold: It gives a voice to Hindu minorities and educates officials in the U.S. and worldwide.

The 2012 report cites Bhutan, Sri Lanka and the Indian state of Jammu as countries of serious concern, while Fiji, Saudi Arabia and Trinidad and Tobago as countries where conditions for Hindus have improved. Kalra said the problem is that many of these nations sanction discrimination, creating “an atmosphere of intolerance at the top, which trickles down.”

Kalra said he’s concerned the U.S. government hasn’t taken more notice of this persecution, adding that human rights often take a back seat to geopolitical issues. But he hopes the foundation’s report works to create a link between the two issues.

The release of the foundation’s report comes the same day that the FBI’s Advisory Policy Board is scheduled to discuss a congressional recommendation to update its Hate Crime Statistics Act. More than 100 members of Congress signed a letter spearheaded by Rep. Joseph Crowley, D-N.Y., that would add three categories —anti-Sikh, anti-Hindu and anti-Arab —to the FBI’s data collection mandate.

Kalra, who urged members of Congress to sign the recommendation, said it is important that the FBI track these numbers so the issues behind these incidents can be addressed.

Opinion
Alabama lifts ban on yoga in schools. Sort of.

Articles of Faith
Why Hindu nationalists are attacking Sikhs in Australia