(RNS) After years of fights over religious monuments on public land, a county courthouse in Northern Florida will soon be the home of the nation’s first monument to atheism on public property.

On June 29, the group American Atheists will unveil a 1,500-pound granite bench engraved with secular-themed quotations from Thomas Jefferson, Benjamin Franklin and its founder, Madalyn Murray O’Hair, among others, in front of the Bradford County Courthouse in Starke, Fla.

The New-Jersey-based group, which has a membership of about 4,000 atheists, humanists and other non-believers, won the right to erect the monument in a settlement reached in March over a six-ton granite display of the Ten Commandments on the same property.

American Atheists sued Bradford County after the erection of that monument last year, claiming its place on the courthouse lawn represented a government endorsement of religion.

Both monuments were paid for by private money. Businessman Joe Anderson paid for the Ten Commandments monument through the Christian Men’s Fellowship, a local group, and the atheist monument was paid for by American Atheists with a grant from the Stiefel Freethought Foundation. 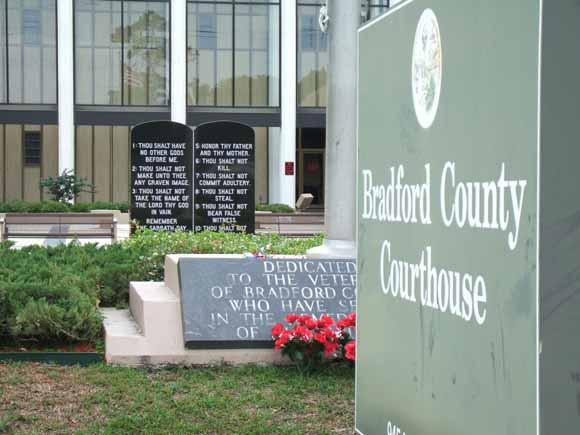 The dueling monuments illustrate an ongoing battle over public displays of religion across the country that have gone beyond the annual December dust-ups over creche displays on civic property. Just this year, there have been legal wranglings over Ten Commandment displays in Oklahoma, Pennsylvania and in another Florida county.

“This is a tactic that is becoming more common,” Haynes said. “If we can’t get religious symbols out of public spaces, then we will put ours up to counter them. If the government allows one groups to put up a display, then it must allow others.”

That strategy has been bolstered by Supreme Court rulings that have found private religious expressions on public property do not violate the First Amendment so long as other expressions are equally allowed. In 2005, the court ruled a Ten Commandments monument on the grounds of the Texas state capitol was permitted because it had historical significance, was privately funded and did not promote one religion over others.

Of course, the strategy can be adopted by any group – religious or non-religious. Will Sexton, an attorney for Bradford County, said that since American Atheists announced their monument last month, the county has received requests for monument applications from several groups, though he did not know if they were religious in nature. So far, no additional monuments have been approved.

Guidelines for privately-funded, public monuments on the Bradford County Courthouse lawn require that the monuments commemorate “people, events and ideas which played a significant role in the development, origins or foundations of United States of America or Florida law, or Bradford County.” Both the Ten Commandments and the atheist monument meet those requirements, Sexton said.

The atheist monument – which looks like a backwards, lower-case letter “h” – is engraved with the words of several Founding Fathers, as well as a quotation from the Treaty of Tripoli, signed by President John Adams in 1797. It reads, “The government of the United States of America is not in any sense founded on the Christian Religion.”

American Atheists president David Silverman will attend the June 29 unveiling. The monument, he said, is his group’s attempt to assert its equality.

“This is not an attack on religion, but rather religion’s monopoly,” he said. “The words on our monument do not deride or mock, but rather they clarify and correct assertions that Christianity has some kind of special place in America over other religious positions. It does not.”

He added that American Atheists has plans for other monuments in other public places.

“Everywhere a religious monument is displayed, we will attempt to place an equalizer,” Silverman said. “And I would like to encourage all religious groups, sects or cults to follow suit. Everyone has the same rights in America, and those rights are lost if not defended.”

[Editor’s note: Religion News Service has received support from The Stiefel Freethought Foundation to support its coverage of atheists and other non-theists.]