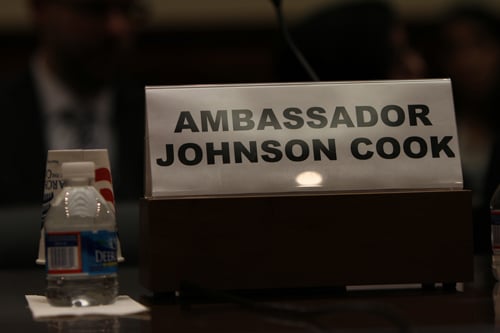 But Thomas Farr, director of the Religious Freedom Project at Georgetown University, said an “anemic, largely rhetorical methodology” by the Clinton, Bush and Obama administrations has resulted in “a loss of conviction among policy makers that religious freedom is the first freedom.”

As if to make the point, the State Department’s Ambassador-at-Large for International Religious Freedom, Suzan Johnson Cook, skipped Thursday’s first-ever hearing by the National Security Subcommittee of the House Oversight Committee.

According to Subcommittee Chairman Jason Chaffetz, R-Utah, the State Department withdrew Johnson Cook as a witness to avoid placing her on a panel with witnesses from non-governmental organizations. Chaffetz called Johnson Cook’s absence “terribly disappointing” and “a waste of Congress’ time.”

A persistent divide between the State Department and USCIRF is over the designation of “countries of particular concern.” USCIRF consistently wants more nations singled out and more often; diplomats in Foggy Bottom typically want fewer. 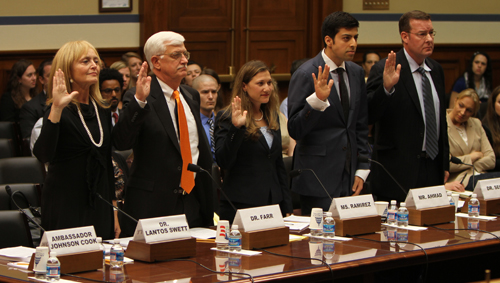 “We continue to believe that when combined with the prospect of sanctions or other actions, CPC designations can move repressive governments to undertake critical changes,” Lantos Swett said.

“Unfortunately, neither Republican nor Democratic administrations have designated CPCs in a timely manner and they generally have imposed pre-existing sanctions, not unique actions,” Lantos Swett said. While she would like to see actions taken against these countries, such as making U.S. financial aid conditional, ultimately USCIRF lacks any real power.

“At the end of the day, that’s really a decision for the Congress,” Lantos Swett said. “I mean, this is where the Congress has to act to hold any administration’s feet to the fire in terms of how that aid is to be handled.”

Johnson Cook’s position went unfilled for the first two years of President Obama’s first term, and USCIRF nearly went out of business last summer until Congress stepped in. Johnson Cook, a former Baptist minister from the Bronx, faced initial skepticism for her lack of experience in the field.

Farr said three administrations since IRFA was created have assumed a narrow approach to the issue of religious freedom—focusing solely on reports, speeches and lists of severe persecutors. The government, he said, is merely “raising the issue” not “solving the problem.”