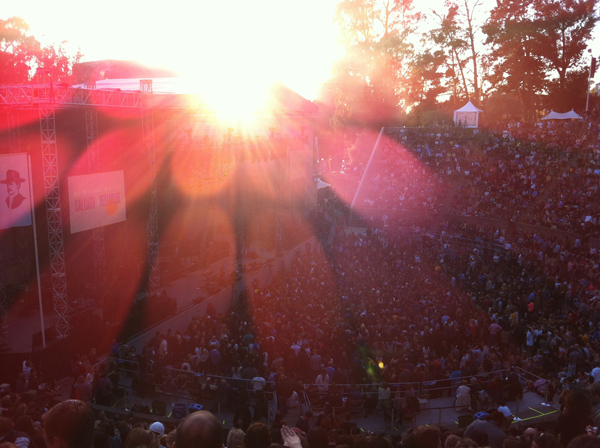 (RNS) "Listen to the words," the young woman behind me stage-whispered to her chatty date. "Are you listening?"

He wasn't. But I was and so was most of the rapt, standing-room-only crowd that crammed the Greek Theatre at UC Berkeley for the second of three sold-out Mumford & Sons concerts late last month. 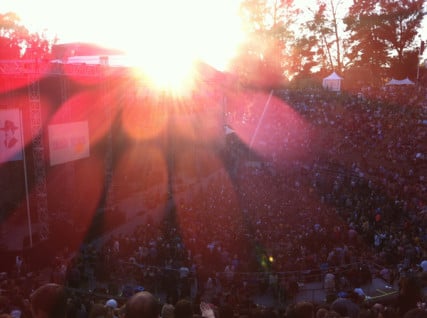 This is what I had come for – not just a concert, but a shared experience with a congregation of strangers (and a few friends).

"Love; it will not betray you, dismay or enslave you, it will set you free," Marcus Mumford and his bandmates – Ben Lovett, Winston Marshall, and Ted Dwane sang. "There is a design, an alignment, a cry of my heart to see, the beauty of love as it was made to be."

More biblical allusions, declarations of spiritual yearning and what felt like prayers of the heart followed during the 90-minute show and the remaining two concerts.

I was not surprised. As a longtime fan, it was what I had expected to hear.

Since their debut in 2009, Mumford & Sons has achieved monumental success, both critically and commercially, particularly among a subset of diehard fans I'd describe as the spiritual-but-not-religious.

It's a modifier that could be (and has been) applied to the band members themselves. Frontman and lyricist Mumford, 26, who was born in Anaheim, Calif., is the son of John and Eleanor Mumford, founders of the evangelical, charismatic Christian Vineyard Fellowship in the United Kingdom and Ireland. He is a pastor's kid, reared in the church where his musical vocation first took root.

Recently, in an interview with Rolling Stone magazine where he was asked about his religious predilections, Mumford declined to affix the "Christian" label to himself, causing a lot of hand-wringing from some evangelical fans who thought he was "one of ours."

His spiritual life is a "work in progress," Mumford said, adding that he has never doubted the existence of God and that his pastoring parents aren't lamenting the condition of his soul.

I'm not worried about him, either. To my ear, the lyrics he's written belie any doubts about where his heart lies.

The other fellas in the band have a spiritual heartbeat as well, though none has described himself as "religious" by any stretch of the imagination.

A hootenanny for the soul, is the way I'd describe it. Mumford & Sons are a delight to watch, all foot-stomping, banjo-blasting, jig-inducing gladness and passion. It is obvious that the four band members not only love what they do, but they love each other.

Last week came unexpected news that Mumford's animated bassist, Dwane, had a blood clot on his brain and would need surgery. Many fans took to Twitter with messages of love and support, as did I, offering prayers for comfort and a speedy recovery.

"You are not alone in this," I added, quoting from one of the band's songs.

A Twitter follower I don't know responded to my tweet, saying, "How odd that a band which provides such a 'religious' experience wouldn't ask for prayers. Closeted piety is so refreshing."

I thought about his comment and posted a response of my own: "They didn't have to ... and I hope they knew that. #wegottheirback."

That is the kind of kinship and faith that the band at once expresses and inspires. There is a community inside the sound. (Happily, word is that Dwane's surgery went well, and he is on the road to recovery.)

In all honesty, I had hoped the visit to Berkeley would result in a sit-down interview with Mumford, whom I find terribly compelling as a musician and a person of faith. I thought we might further explore the soul behind the music and its inspiration.

There was no interview to be had, but in hindsight, it would have been something of a fool's errand. I don't know that there's anything Mumford could have told me in a conversation that I didn't know after hearing the band play and watching the audience have an experience with the music and the musicians themselves.

Much of what I learned came not through words, but in posture, gesture, and moments at once visceral and transcendent.

When the band sang a cappella or in softer tones, the audience collectively leaned forward, listening intently, perhaps even prayerfully.

The most meaningful and powerful moments in the show for me arrived with the same song: "Timshel." It takes its name from John Steinbeck's novel "East of Eden," which has been described as a modern midrash of the biblical story of Cain and Abel.

In their song, Mumford & Sons begin with another line borrowed from Steinbeck, "Cold is the water," from "Of Mice and Men."

The song is more contemplative than rollicking. But it builds ...

"Cold is the water that freezes your already cold mind," it begins, the quartet singing in harmony with no accompaniment. "Death is at your doorstep, and it will steal your innocence. But it will not steal your substance."

As the crowd joined, I saw thousands of raised hands and upturned faces, some with eyes closed, repeating the lyrics at the top of their lungs.

It was a sacred promise from fellow travelers along the spiritual journey that is this life.

"I will tell the night, whisper, 'lose your sight,'" he sang, "but I can't move the mountains for you."

Such heavy lifting is the work of the Spirit alone.

While we wait, the hold music is marvelous, and we're in great company.

(Cathleen Falsani is the faith & values columnist for the Orange County Register. You can follow her on Twitter @godgrrl.)