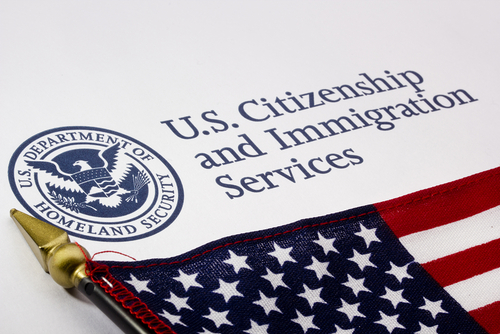 (RNS) A woman who has lived legally in this country for more than 30 years was granted her request to become a naturalized United States citizen Thursday (June 20) after initially being refused conscientious objector status because she is not religious. 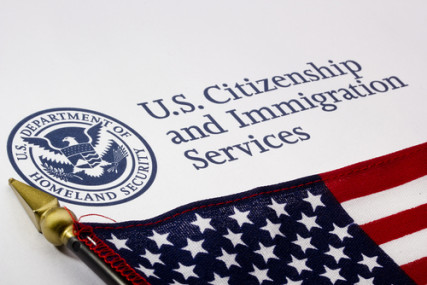 Photograph of a U.S Citizenship and Immigration Services logo and flag courtesy Shutterstock.

Margaret Doughty, who came to the U.S. in 1980 from England, was informed by U.S. Citizenship and Immigration Services that unless she provided a letter from a church or a religious official by June 21 backing up her assertion that her “lifelong spiritual/religious beliefs” would prevent her from taking up arms for the U.S., her application would be denied.

Immigrants seeking citizenship must pledge to defend the U.S., unless they can prove they are conscientious objectors — people whose religious beliefs prevent them from engaging in war. Conscientious objector status has been awarded to Quakers, Buddhists and others.

But in a 1965 case that involved folk singer Pete Seeger, the Supreme Court ruled that those who are not members of a religious group can also achieve conscientious objector status, provided they prove their objections to taking up arms come from long-held moral beliefs. The court upheld that ruling again in 1970, in a case involving an atheist.

Doughty provided both oral and written testimony describing the nature of her objection to bearing arms, and noted that, as a 64-year-old, she was unlikely to be asked to do that. Still, immigration officials asked her both in person and in writing to provide proof of her beliefs with a letter from a church or religious official. “The experience I had indicated there is real pressure on people to agree to bear arms,” she said by telephone from her home in Palacios, Texas.

“The officer said to me you really are not ever going to be called up, so it is okay for you to just agree knowing that it will never happen. I was shocked. It seems as if there is some kind of pressure, perhaps even intimidation to encourage people to say they will bear arms.”

Doughty, who describes herself as a person with no religious affiliation, declined to sign the oath. She provided a written statement describing her objections to bearing arms as comparable to those who object on religious grounds.

But it wasn’t until an array of supporters — attorneys, politicians, activists and bloggers, both secular and religious — came to her defense that immigration officials reversed course.

Doughty received an email Thursday from the office of Rep. Blake Farenthold, R-Texas, telling her of the reversal after he intervened with immigration officials on her behalf.

William Burgess, an attorney at the American Humanist Association’s Appignani Humanist Legal Center, sent a letter on Doughty’s behalf to the USCIS informing them that requiring an atheist to supply a letter from a church in order to gain citizenship is illegal.

“We are not sure how frequently this happens,” Burgess said. “We don’t know how many people just sign the oath or get a letter from a religious official. I am hoping this was unusual because it was clearly illegal.”

Doughty will attend a naturalization ceremony on June 26 with her partner, family members and her best friend, a South African woman who came to the U.S. about the same time as Doughty.

She said she has received requests from strangers all over the country to join her for the ceremony.

“I am delighted and very grateful that all of the people who rallied around to help prevailed against the system,” she said.