SPOKANE, Wash. (RNS) Still angry about the idea of an Islamic cultural center opening near Ground Zero, a group of Idaho gun enthusiasts decided to fight back with a new line of pork-laced bullets. 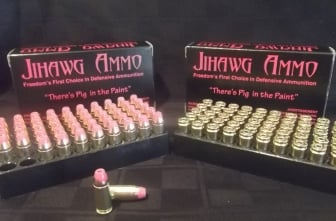 South Fork Industries, based in Dalton Gardens, Idaho, claims its ammunition, called Jihawg Ammo, is a “defensive deterrent to those who violently act in the name of Islam.”

The bullets are coated in pork-infused paint, which the company states makes the ammo “haram,” or unclean, and therefore will keep a Muslim who’s shot with one of the bullets from entering paradise.

“With Jihawg Ammo, you don’t just kill an Islamist terrorist, you also send him to hell. That should give would-be martyrs something to think about before they launch an attack. If it ever becomes necessary to defend yourself and those around you our ammo works on two levels,” the company said in a press release earlier this month.

The company’s website bills the bullets as “Peace Through Pork” and a “peaceful and natural deterrent to radical Islam.” There’s a related line of apparel that feature slogans like “Put Some Ham in MoHAMed” and a target poster that says “Give Em a Spankin with some Bacon.”

“The nullifying principle of our product is only effective if you are attacked by an Islamist in Jihad,” the company’s website says. “Otherwise, our ammo functions just like any other ammunition, so we obviously insist upon defensive use of our ammo only-not offensive.”

However, Shannon Dunn, assistant professor of religious studies at Gonzaga University, said South Fork’s concept is based on an inaccurate understanding of the Quran.

“There is no penalty for coming into contact with pork given by the Quran,” she said, pointing to verses that prohibit the consumption of pork and carrion that are reminiscent of Jewish dietary laws outlined in Leviticus.

“To my knowledge, Muslims, especially unknowingly, would not be banned from heaven for eating or getting hit by pork,” she said. “There are some interpreters who suggest that Muslims should eat pork rather than starve, if faced with that alternative.”

Nevertheless, the ammo has plenty of supporters, with more than 4,300 people liking it on Facebook. One fan, Ted of California, said he planned to buy 500 rounds. Another, Jeffrey, said he hoped someone would smuggle the bullets into U.S. military troops.