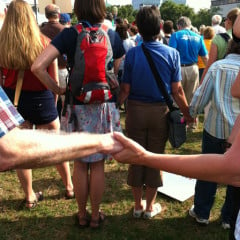 RALEIGH, N.C. (RNS) The throngs of demonstrators who flock to the grassy knoll outside the North Carolina Statehouse each Monday know the drill.

They listen to a fiery speech denouncing the Republican majority’s legislative actions. They sing freedom songs and chant civil rights slogans. Then they march two by two into the legislative building to be handcuffed by police and arrested for failing to obey orders to disperse.

Leading them in this weekly rite of nonviolent civil disobedience is the Rev. William J. Barber II, president of the state’s NAACP chapter. Since assuming the state presidency eight years ago, he has waged numerous battles challenging local and state governments to extend educational opportunities, broaden the voting base, provide health care and more generally lift up the poor.

At a time when the country is becoming less religious and liberal politicians shy away from faith-based rhetoric, this Disciples of Christ minister, steeped in the activist traditions of the black church, has emerged as a galvanizing force in North Carolina’s pushback against the Republican-dominated legislature.

And with his bearlike stature and thundery oratory, he has towered over his secular political counterparts.

Over the course of nearly two months, he has prodded 480 North Carolinians to get arrested during weekly “Moral Monday” demonstrations. At Monday’s (June 24) demonstration, Barber expected nearly 300 more at what is billed “Mass Moral Monday.” 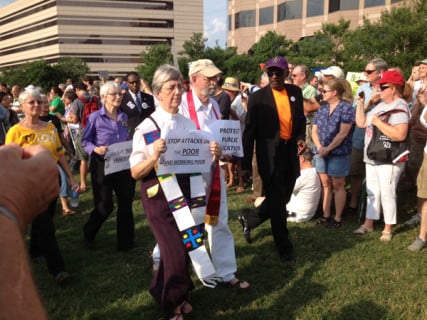 Two clergy members march against cuts to education during the seventh Moral Monday protest on June 17 in Raleigh, N.C. Photo by Anna Scott/WilmingtonFAVS.com

“He communicates the message of the South with a power I had heard only in recordings of Dr. Martin Luther King,” said Jonathan Wilson-Hartgrove, a Christian writer and activist in Durham who has known the preacher since he was in high school.

With Barber steering the opposition to cuts in unemployment benefits, health care funding, voting rights and environment regulations, the movement has taken on the feel of a church revival. Each demonstration begins with a call to join hands and pray. Barber’s speech is inflected with biblical references to Pharaoh, Goliath, good and evil. Then there are the folksy civil rights refrains: “Woke up this morning with my mind set on justice,” and “Ain’t gonna let nobody turn me around.”

With his photo in the newspapers and on TV, the 49-year-old Barber has become as well known as Gov. Pat McCrory and Republican leaders of the House and Senate.

At a Durham coffee shop last week, web developer Jim McManus walked up to Barber to say, “Thank you for all you’re doing with Moral Monday.” 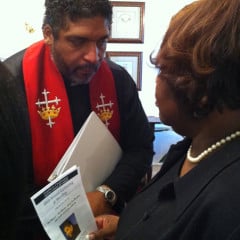 To outsiders, North Carolina is often indistinguishable from a host of Southern states with equally conservative social and fiscal agendas. But in fact, it has long been a moderate state in which Democrats controlled the governor’s office for 20 years, and until last year, controlled at least one body of the legislature since the 1800s.

No one knows this better than Barber, an avid student of the state’s history. Barber talks incessantly of his vision for “fusion politics” modeled after a period in the late 19th century when the state’s Populist and Republican parties, blacks and whites, joined forces to govern the state.

He points out he’s not wedded to the Democratic Party but rather to coalitions that are willing to fight for just causes.

“Narrow-minded, isolated agendas aren’t going to hold themselves up as meaningful in the changing demographics of our country,” he said. “A regressive agenda doesn’t fit.”

To that end, he rises at 6 a.m. each day and spends countless hours crisscrossing the state in a black GMC Yukon, meeting with various constituencies and building an ever-growing coalition.

After speaking to a conference of United Church of Christ ministers, he climbed into his car, got on his cell phone and joined a conference call with ministers, rabbis and academics. By 10 p.m., he set off for the 90-minute commute back to Goldsboro where he lives with his wife and five children. A clergyman protesting for the environment at the General Assembly in Raleigh, N.C. on June 17. Photo by Anna Scott/WilmingtonFAVS.com

The feverish activism is something he learned from his father. Barber was born in Indianapolis on Aug. 30, 1963 — two days after the Rev. Martin Luther King delivered his “I Have a Dream” speech from the steps of the Lincoln Memorial. His father, William, a minister and an activist, was so swept up by the civil rights movement, he decided to move his family back to North Carolina and enroll his only son in a segregated school.

Barber picked up the mantle early. He was elected president of the NAACP’s youth council at age 15, president of his high school’s student body at 17, and student government president at North Carolina Central University at 19.

He worked for the Rev. Jesse Jackson’s failed 1984 presidential bid, and succeeded in opening a voting precinct on campus.

After completing a master’s at Duke Divinity School, he settled into the life of a pastor but very quickly found himself fighting on behalf of his congregants for clean water or the right of labor groups to organize.

“There’s no one who works harder,” said Rob Stephens, the field secretary for the NAACP chapter. “You can never do as much as what he’s going to do.”

All that activism hasn’t won him many friends among Republicans in Raleigh, some of whom have dubbed the protests “Moron Mondays” and labeled the demonstrators “mostly white, angry, aged former hippies.”

“They’re counterproductive,” said Rep. Craig Horn, a Republican who represents Union County outside Charlotte, referring to the demonstrations. “I appreciate the concerns many people are voicing, and the desire to be heard on a number of issues. But the way they’re going about it serves no good purpose. It’s all show and no go.” 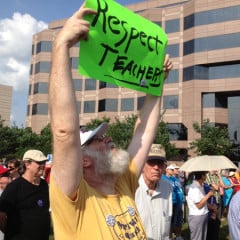 There’s no question Barber is a polarizing figure to some, and that may be the reason there haven’t been any serious face-to-face conversations between the lawmakers and the demonstrators.

Barber, too, may recognize there’s little maneuvering space with the current legislature. He’s focused on legal challenges and voter registration drives intended to stop the government’s actions in its tracks.

“We may not sprint forward,” he acknowledged, “but there’s a resistance to going backward.” That’s why he’s picked the slogan for his campaign: “Forward together. Not one step back.”

And then there are the arrests. On Monday morning, Barber was in court to challenge them on constitutional grounds. But on Monday night, many will proudly wear a gray and white pin. It reads: “I went to jail with Rev. Barber.”