“Due to our common roots, a Christian cannot be anti-Semitic!” he told a delegation of the International Jewish Committee for Interreligious Consultations, the Vatican’s official partner for interfaith dialogue with the world’s Jews.

In his speech, Francis stated that the church condemns “hate, persecution, and all manifestations of antisemitism.”

He also reiterated that the Second Vatican Council’s 1965 declaration “Nostra Aetate” remains the key point of reference for Catholic-Jewish relations.

The document had received renewed attention in recent years as Pope Benedict XVI tried to reconcile the church with a traditionalist breakaway group that refused the modernizing reforms of Vatican II, including dialogue with the Jews.

Benedict’s relations with Jews had been also fraught with controversy over a revived Good Friday prayer that called for Jews’ conversion and the progress toward beatification of Pope Pius XII, whom Jews accuse of having remained silent during the Holocaust.

Francis himself is no stranger to Jewish-Catholic dialogue. In his native Argentina, then-Cardinal Jorge Bergoglio had strong ties to the local Jewish community and wrote a book-length interview with Rabbi Abraham Skorka.

When terrorists killed 85 and wounded 300 in a 1994 bombing at a Jewish center in Buenos Aires, Bergoglio expressed solidarity with the local Jewish community. On the day after his election, he personally invited Rome’s chief rabbi to his inauguration Mass at the Vatican. 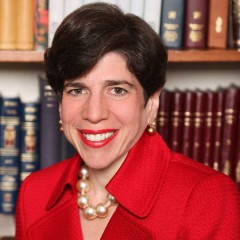 “Pope Francis is a very good friend of the Jewish people and we rejoice in the fact that he will continue to advance the path of his predecessors in deepening the Catholic-Jewish relationship even further,” said Rabbi David Rosen, director of international interreligious affairs at the American Jewish Committee, after meeting with Francis.

Rabbi Julie Schonfeld, executive vice president of the Conservative movement’s Rabbinical Assembly, described the meeting with the pope as “very positive” and “familiar.”

“You could see that he had ties with Jews back home,” she said.

In her brief conversation with Francis, Schonfeld said she praised the work of American nuns in combating human trafficking, and hoped for enhanced Catholic-Jewish cooperation on the issue.