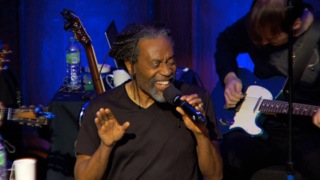 Titled “spirityouall,” the recording includes his adaptations of traditional African-American spirituals and devotional songs that he composed.

“It elicits so many emotions,” the musician told the PBS program “Religion & Ethics NewsWeekly.” “Music has a way of communicating … that language does not. It can go past language.”

McFerrin said his Christian faith permeates everything he does. And it’s particularly evident in this new album, which he said honors the legacy of his father, Robert McFerrin Sr., the first African-American to sing a title role at the Metropolitan Opera.

The senior McFerrin also released an album of spirituals, “Deep River,” in 1957.

“I never heard my father pray (out loud),” said McFerrin. “But I always heard him pray whenever he sang these spirituals.”

McFerrin said he tries to pray as he sings, too. “The hope is that when people hear these pieces that they’ll carry them home with them and then they’ll inspire them to begin a spiritual journey or to continue on it.”

McFerrin’s grandfather was a Baptist minister, and he grew up in the Episcopal Church. When he was 16, he wanted to become a monk in the Anglican tradition. He gave up on the idea in his early 20s when he realized he was meant to be a singer, but the religious impulse remains.

“I’m still a very quiet guy, and I love the Scriptures,” McFerrin said, adding that he reads the Bible through over and over again. “I could read the same verse 1,000 times but the 1,001st time I read it, I’ll find something in it that I hadn’t seen before.”

When he’s not traveling, McFerrin still attends an Episcopal church. But he doesn’t like narrow labels. 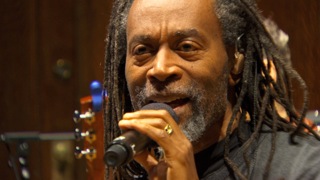 “I don’t really think of myself as a religious person per se, but more a spiritual person who follows Christ, who follows Jesus as my spiritual master,” he said.

McFerrin has received 10 Grammy Awards since the 1988 release of “Don’t Worry, Be Happy.” He has conducted classical orchestras and released albums featuring styles from across the musical spectrum. He frequently works with young people, trying to help them see the power of music. It’s a lesson he said his mother taught him when he was a boy.

“She knew how music was a healing balm because whenever I was sick she’d give me two things: She’d give me medicine for my aches and pains and she’d give me music for my spirit,” he recalled.

“Music does have incredible power to rearrange your insides, rearrange your thoughts, heal your body.” McFerrin’s favorite book in the Bible is the Psalms. Several years ago, he wrote a song based on Psalm 23, but in his version, the love of God takes on feminine form.

The song has been adopted by choirs across the country. It was inspired, he said, after he and his choir were rehearsing in a church and began discussing the many male images in the Bible.

“It just seemed to make sense. People forget, you know, (there’s) a father’s love and then there’s a mother’s love, which complements the father’s love, and they fit together nicely,” he said.

He said one of his job descriptions as an artist is moving people to joy.

“If there’s any one thing I want it’s for people to have that sense of joy, the joy that I feel just being able to sing.”

McFerrin believes his musical ability is a gift from God.

“My father used to say, ‘The Lord has entrusted me with a talent. It’s not my gift.’ … I absolutely feel that way, that he’s given me this gift to share with other people and to uplift hearts.”

(A version of this story was first broadcast on the PBS television program “Religion & Ethics NewsWeekly” www.pbs.org/religion.)