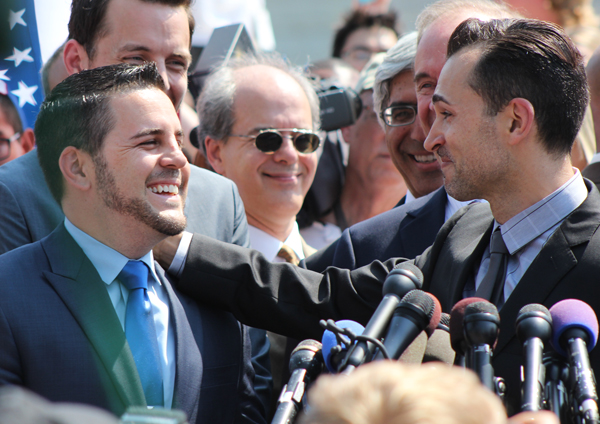 (RNS) The first thing I did when I read the U.S. Supreme Court’s decisions in the cases involving the Defense of Marriage Act and California’s Prop 8 on Thursday morning was offer a silent prayer.

It was short -- just two words -- completely heartfelt and probably far more eloquent than anything I’ll manage to write in this space today.

It was neither a triumphalist exclamation, nor a satisfied sigh of relief. Rather that unspoken thanks emanated from a dusty corner of my soul where gratitude -- genuine, awestruck, gob-smacked gratitude -- abides. After the Almighty, my thoughts turned to people as a litany of names and faces flashed through my mind -- friends, family, colleagues, classmates, acquaintances, and more than a few people I know only from a distance.

They are gay, lesbian, bisexual, transgender, and straight.

Many of them are people of faith, but many more of them abandoned religion and God because of the cruelty heaped upon them in the name of both.

Since I graduated from my evangelical Christian alma mater more than 20 years ago, no other issue has been more divisive in my social and spiritual circles than homosexuality and same-sex marriage.

And yet I cling to hope that this too shall pass. The same source that taught me to “hate the sin but love the sinner” and showed me where to find the Bible verses that “prove” homosexuality is a sin, also helped me learn the Golden Rule and the verse in St. Paul’s first letter to the Corinthians that says, “Love never fails.”

It is precisely because of -- not in spite of -- the faith that defines my most essential self that I believe we are all equal in God’s eyes and that we all should enjoy the same legal rights and privileges no matter what our gender, race, creed, or sexuality might be.

I am a Christian and I am an evangelical. I am straight and I am married.

My faith tradition believes in a sovereign God of unbridled grace. It is not my business to try to legislate my beliefs, morality or fears. It is not my job to cajole, guilt or persuade people to behave in a certain way. That is God’s purview.

Therefore, I celebrate these new steps toward marriage equality. And I stand in solidarity with my LGBT brothers and sisters without reservation. That I have not always done so, I ask their forgiveness and God’s mercy.

The year after I graduated from Wheaton College in 1992, several of my friends came out to me as gay or lesbian. I can still picture exactly where I was sitting when I got the first phone call -- the way my chest tightened, my pulse raced, and my mind reeled.

I didn’t know what to say. I knew what I should say -- or rather what my faith tradition as I understood it at that time would expect me to say. But I couldn’t say it. I couldn’t tell Pete, who had prayed for years for God to “change” him, to pray a little harder.

I couldn’t tell Tia that she should try to forget her love for another woman and be celibate for the rest of her life because Jesus was “more than enough.” Not because it was too hard to say, but because I didn’t believe with any certainty that it was true.

Instead, I said what I knew for sure: I love them and God loves them. Period.

Two decades later, it’s still the only thing I know for sure, and it’s not only more than enough, it is the beating heart of Christianity.

It would be a stretch to make a case, based on proof texts, that the Bible endorses homosexuality. But it’s even more difficult to find biblical support for the way in which Christians have maligned, ostracized and otherwise mistreated the gay community.

There are more verses in our holy writ pertaining to mildew and crustaceans than there is material related to homosexuality.

On the other hand, the Bible is rife with verses, passages, and even entire books about love -- love of God, love for each other, God’s love for us, love for family, for the stranger, for our “enemies.”

Jesus never said a word about homosexuality. But, oh, how he did go on about love. He even commanded his followers -- without caveats and on several occasions -- to love.

On Wednesday, one of my spiritual mentors said something that, without my realizing it at the time, prepared my heart for Thursday’s news.

“Whenever you see religious people where their faith is more important than love,” he said, “they’ve got it the wrong way around.”

There is a verse that, even if you’re not a believer of any stripe you’ve probably heard at least once at a wedding -- maybe even at a gay wedding. It’s a passage from 1 Corinthians 13, St. Paul’s letter where he says, “Love never fails.”

“For now we see in a mirror, dimly, but then we will see face to face. Now I know only in part; then I will know fully, even as I have been fully known,” St. Paul wrote. “And now faith, hope, and love abide, these three; and the greatest of these is love.”

In the final analysis, today or any other day, love is even greater than faith.