(RNS) About a week after a video of Buddhist monks riding a private jet went viral on YouTube, pictures of monks checking out iPhones and sipping Starbucks coffee in the United States are making waves in Buddhist-majority Thailand.

While Buddhist clergy are supposed to shun the worldly life, the latest pictures show monks looking at phones and tablets at an Apple store, posing at a Universal theme park, dining at a steakhouse and sipping Starbucks coffee in the U.S. 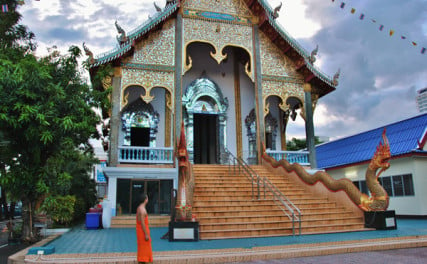 The pictures come after a video clip showed three monks — one of them carrying a Louis Vuitton bag — aboard a private jet, flying to France to give Buddhist lessons.

Thailand’s National Office of Buddhism, which is mandated to maintain and promote Buddhist affairs, has received numerous complaints. The office has publicly condemned the worldly indulgence of monks as “indecent,” but without following it up with action, as their conduct did not constitute “serious offenses.”

Office Director Nopparat Benjawattananan said the monks did not breach monastic rules by flying on a private jet, since it was donated to them, according to the Bangkok Post.

One of the monks on the jet has been identified as Luang Pu Nenkham Chattigo, the 34-year-old abbot of a temple in Kanthararom district of northeastern Sisaket Province.

Sanitsuda Ekachai, an assistant editor at the paper, criticized the office for its reluctance to discipline influential monks. “What else can it say when all powerful monks live this way?” she wrote.

Meanwhile, a group of Thai activists has lodged a complaint with the Anti-Money Laundering Office to probe the assets of Chattigo and his close associates.

Another monk, popularly known as Luang Phi Namfon from the Nakhon Pathom Province, is being investigated by the Ministry of Justice for owning luxury cars.

Bangkok-based National Institute of Development Administration conducted a survey on “monks and materialism” this week.

More than 90 percent of the 1,249 Buddhist respondents said it was inappropriate for monks to travel in luxury vehicles or have personal belongings.

The survey also found that about 47 percent believe fewer people are visiting Buddhist temples due to the monks’ lavish indulgence, and another 30 percent believe temples have become too commercialized.

About 95 percent of Thailand’s 66 million people are Buddhist. 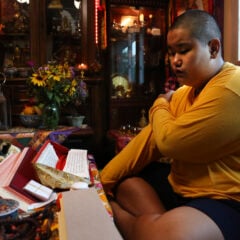 News
Teachers turn to mindfulness after a stressful pandemic year
Follow us on Facebook!
Submit your photos to RNS