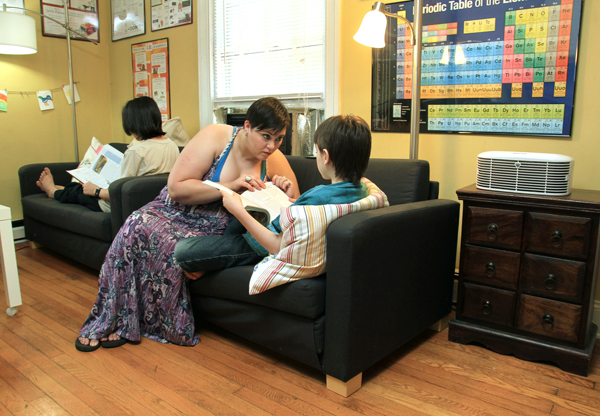 KellyAnne Kitchin and her son, Daniel, go over a lesson while oldest son Christopher, 12, reads in the background. The family's living room also serves as the main classroom. RNS photo by Rick Foster
July 1, 2013
Kimberly Winston

(RNS) When KellyAnne Kitchin began home schooling her three sons three years ago, she had difficulty finding  curriculum programs that fit her atheist and humanist beliefs. KellyAnne Kitchin with her husband, Daniel Kitchin III, in their home. RNS photo by Rick Foster

So Kitchin, 33, cobbled together what she could. She left out one geography textbook’s description of the earth as God’s creation and another’s disdain for Darwin, and substituted her own point of view  — that no supernatural powers guide human beings, who alone have the power to improve the world.

She also found many online forums for home-schoolers were unwelcoming. Some had statements  faith members needed to agree to. On others she was made to feel unwelcome because of her lack of beliefs.

So Kitchin has formed an online group of like-minded home-schoolers from across the country. She hopes to create a lending library of resources that humanist, atheist and other nonbelieving home-schoolers can use with confidence.

“I found out there were a lot of people who were in the same boat I was in and did not know how to come out and have a community,” said Kitchin, of Winchester, Va. “I am hoping we come up with a big place and have some resources and some support.” 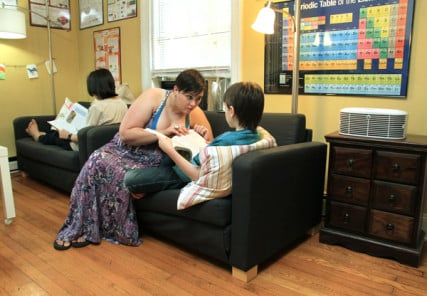 KellyAnne Kitchin and her son, Daniel, go over a lesson while oldest son Christopher, 12, reads in the background. The family's living room also serves as the main classroom. RNS photo by Rick Foster

While two-thirds of home schooling families are Christian evangelicals, the number of secular home-schoolers is significant —25 percent, according to the Home School Legal Defense Association.

What's more, the number home-schooled children is rising — from 850,000 in 1999 to 1.5 million in 2007, according to The National Center for Education Statistics. Some national home-school organizations put the number higher, at more than 2 million.

And while no one tracks how many identify as atheists or humanists, this latter group may be reaching a kind of critical mass where they are able to organize in communities, both virtual and physical.

Unlike Christians, who cite religious reasons for home schooling, secular parents say they are motivated out of frustration with the poor quality of their local public schools.

“With schools now there is so much pressure to perform,” said Ute Mitchell, a humanist in Portland, Ore., who  began home schooling her three children seven years ago.. “They are teaching to the tests, there is the bullying and drugs and the guns. It is kind of endless. Home schooling seemed like a no-brainer to us.”

In 2002, Mitchell helped found Village Home, a community of Portland-area home-schoolers that has grown to 450 families and holds some classes in a local church building. Some member families are humanist, while others are Christian and Jewish, Mitchell said. All are committed to a secular education. 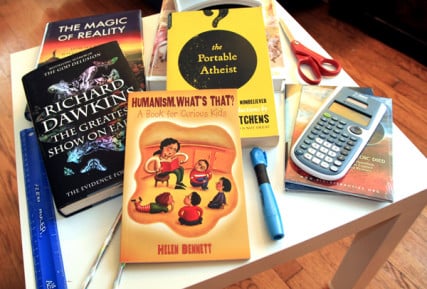 Some of the books that inform the Kitchin family's humanist approach to education and life in general. RNS photo by Rick Foster

Amy Wilson, who home-schools her son and daughter, is on the board of the Organization of Virginia Home Schoolers, an inclusive community of home-schoolers with members who are Christian, Muslim, Jewish and atheist, like her. She said that kind of diversity has been a plus.

“I am less judgmental about religion because in home schooling I have met so many religious people who are accepting of me,” Wilson said.

Many nonbelieving home-schoolers do not avoid religion altogether but teach its history and philosophies.

“It is not that we don’t want out children exposed to that, we do,” Kitchin said. “We just come at it from a different angle. We say it is mythology, we use critical thinking and analyze those religions.”

Still, finding curricula and materials has sometimes been a challenge, Kitchin said. Most American publishers, aware of the large Christian home-school market — up to $650 annually, according to some estimates — tailor their materials accordingly. In their science books, evolution is a bad word. 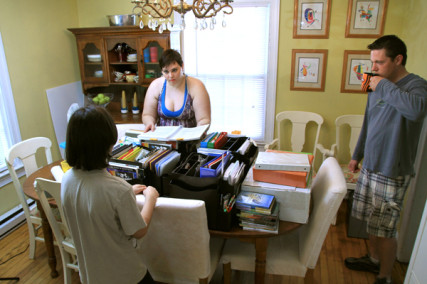 KellyAnne Kitchin talks with her son Christopher, 12, about the next semester she is preparing for their home school. At right, her husband, Daniel Kitchin III, a professional truck driver, sips his coffee and listens in. The family's dining room serves as a central office for them. RNS photo by Rick Foster

Kitchin has purchased texts from as far away as Germany, England and France. With three sons, ages 5, 8 and 12, with different interests and different levels of learning, all those textbooks can be pricey.

“That is the biggest challenge — finding something that is affordable, current and not religious,” Kitchin said.

So Kitchen has teamed up with Jennifer Gauthier, a humanist home-schooler in Oklahoma,to establish a kind of lending library and support network for nontheistic home-schoolers.

Through an online fundraising campaign, they received donations of both cash and materials for their library. On their wish list: secular Latin, science and math resources.