A Star-Spangled Virgin Mary via the Tablet of Brooklyn. http://thetablet.org/religious-freedom-under-siege/
July 3, 2013
David Gibson 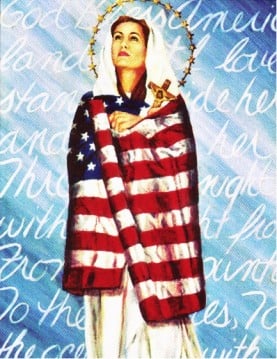 A Star-Spangled Virgin Mary via the Tablet of Brooklyn.
http://thetablet.org/religious-freedom-under-siege/

I did a double-take when I received the latest edition of The Tablet, the newspaper of the Catholic Diocese of Brooklyn, and saw this image taking up most of the front page. It is the Blessed Mother wrapped in the American flag, and a poster of the photo has been sent to all parishes in the diocese.

The ad is part of the Fortnight for Freedom campaign by the bishops, which ends Thursday, July Fourth, with a closing Mass at the Basilica of the National Shrine of the Immaculate Conception in Washington, celebrated by Cardinal Donald Wuerl. (A number of other dioceses around the country will have similar events.)

The Fortnight for Freedom (perhaps not a felicitous name for a celebration of American independence from Britain) aims to highlight threats to religious freedom -- an American and a Catholic (well, relatively recently) value -- as the framework for fighting the Obama administration's contraception mandate and also gay marriage. NCR's Michael Sean Winters has some good questions and critiques here.

This Star-Spangled icon of the Virgin is what bothers me. The Tablet provides no credit as the artist behind the image, and it doesn't seem to come from the various resources offered at the USCCB's Fortnight for Freedom page. To be sure, the rhetoric in the F4F campaign as well as the structure of the liturgical celebrations figuratively wrap the church in red, white and blue: the campaign begins on the vigil of the feasts of Sts. John Fisher and Thomas More on June 21 and ends on July 4th, the "feast day" of the United States.

So maybe this image just brings home what the bishops have been preaching. But this icon seems over the top -- and disturbing. I know Catholics have in the past gone out of their way to demonstrate their bona fides as good Americans. But this? The flip side of a Thomas Nast cartoon, to me.

At the Millennial blog, Robert Christian is on the same page:

But I wonder if I am the only one who winces at this mixing of religious and patriotic (or nationalist?) imagery.  I realize the US is not Serbia in the 1990s, where religion fused with nationalism to generate genocidal fervor, but I would still rather not see Mary or Jesus wearing the American flag or holding a bald eagle.  Some might see this as potentially dangerous.  Others seem to worry it borders on national idolatry.  My initial reaction was that it was absurd and silly.  Decking Mary or Jesus out in American flag gear is perilously close to Ricky Bobby territory.