Conservative Christians have long argued yes to both of these questions, while secularists have advocated for the opposite view. Last month someone posted this entertaining video about it:

While I’m a strict advocate of the separation of church and state, and should therefore be inclined to cheer at this video, not everything in it is perfectly accurate. For example, the figure of 80% of early Americans not attending church doesn’t take into account the logistics of how many of them even had access to a church in the eighteenth century. It’s just not a fair comparison — to say nothing of the fact that it’s not like Gallup was galloping around the circuit at the time, taking polls. 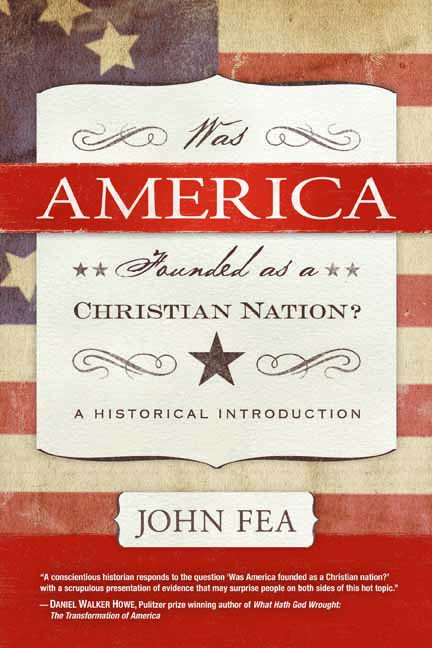 Historian John Fea argues that the truth is more complicated than either side’s acolytes seem willing to believe.

And according to John Fea’s award-winning history book Was America Founded as a Christian Nation?, the issue of the “godless Constitution” is more complicated than this video makes it seem. Yes, there is absolutely no mention of God in the U.S. Constitution. However, this was primarily because the founders had decided that religion was a matter that needed to be left up to the individual states. And of the original states, Virginia was the only one that, like the federal Constitution, had a firm separation of religion and government. The other states all “constructed republics that were, in one way or another, explicitly Christian” (p. 162).

So the question about whether America was meant to be a Christian nation depends quite a lot on how you define nationhood. If it’s defined by the will of our foundational federal document, then no: the framers of the Constitution did not establish America as a Christian nation. However, if nationhood is defined by the will of the people as expressed in the various state constitutions and laws, then it gets rather murky.

What I find, though, is that people on both sides of the issue don’t want to examine these historical nuances. In the video, Mrs. Betty Bowers (a Colbert-like persona who appears to advance neocon ideology while satirically demonstrating that position’s logical flaws) won’t allow “pesky facts” to get in the way of her idea that America was and is a Christian nation. But the wholly secular thrust of the video ignores other important facts as well.

On this Independence Day, maybe one of the ways we can best honor our country is to recognize that historical truth is more complex than our slogans can ever capture.