(RNS) Racism remains a dark, durable — and seemingly intractable — element of the American personality. Predictably, the trial of George Zimmerman for the fatal shooting of unarmed black teenager Trayvon Martin was a national racial Rorschach test. 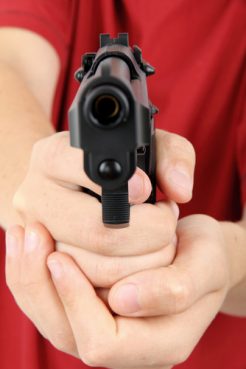 A young person holding a gun.

The not guilty verdict has allowed shadow racists among conservative media pundits the cover to begin to emerge with their real agendas: Trayvon Martin was a typical, young, inner city thug, and he got what was coming to him.

The case opened a vein of bile only exacerbated by the anonymity of the Internet. As demonstrated in the past, people were willing to write vile things from behind the cyber curtain they would never have the courage to say in public (albeit often with spelling, punctuation and grammatical errors). The more threatening of these — amplified and magnified by talk radio and cable television — raised fears of post-verdict violence that have thus far not materialized.

I covered more than two dozen capital murder, rape and insurrection trials in the South in the 1970s, and death penalty cases in California in the 1990s.

I covered the shooting of Trayvon Martin and the trial of George Zimmerman, and have a dual perspective on the proceedings, and the outcome. As a longtime court reporter, the jury’s decision did not surprise me. As a religion writer the outcome was nonetheless troubling, no less for having seen it coming.

The further you are from the courtroom the more ethically and morally vexing Zimmerman’s acquittal must seem. Where is the justice? Did not Trayvon Martin, have a superior moral — and legal — right to stand his ground and to defend himself that rainy night, returning from an innocent errand? Clearly, he did.

Part of the problem with the trial, apart from the prosecution’s now widely acknowledged blunder in overcharging Zimmerman with second-degree murder, lies with the Florida legislature, and the political climate that sent its members to Tallahassee.

In particular, with the lunatic — and, I would argue, racist — manner in which it has defined self-defense. You can start a fight for any reason, and if you begin to lose the altercation, and feel you are about to suffer grave body harm, you can kill the other person with total immunity.

Or, worse, if you manage to extricate yourself, you are under no obligation to leave the scene. You can safely stand in the middle of the street and shoot the other person in the heart. (The state’s “Stand Your Ground” law played no role in Zimmerman’s criminal trial.)

Where are the moral and ethical underpinnings for such a legal philosophy? Much of it, in my view, and that of other political historians, derives from a Florida legislature controlled by a Republican Party whose modern, 20th-century foundation is the White Citizens’ Council; when Southern blacks battled their way into the Democratic Party as part of the civil rights movement, diehard racist whites left for the GOP.

More recently, the GOP has been shaped and skewed by a demagogic notion of what constitutes law and order, and a creepy, almost pathological fixation with carrying concealed handguns. In Florida, Texas or North Carolina there is little demonstrated practical need for citizens in non-high risk occupations to be armed outside their homes and places of business.

With barely a wink and a nod, it is evident to a significant segment of the white political class in Florida, and throughout the Sunbelt, who the menace is considered to be — the “other,” people like Trayvon Martin. In much the same way that lynchings in the 19th and 20th century served as a symbolic — and actual — mechanism of social control in the South, so too does the acquittal of George Zimmerman for taking the life of Trayvon Martin.

(Longtime religion writer  Mark I. Pinsky is author of the forthcoming “Met Her on the Mountain: A Forty-Year Quest to Solve the Appalachian Cold-Case Murder of Nancy Morgan.”)