(RNS)  There is a lopsided divide in America about what it means to be a religious person, with a majority believing that it’s about acting morally but a strong minority equating it with faith. 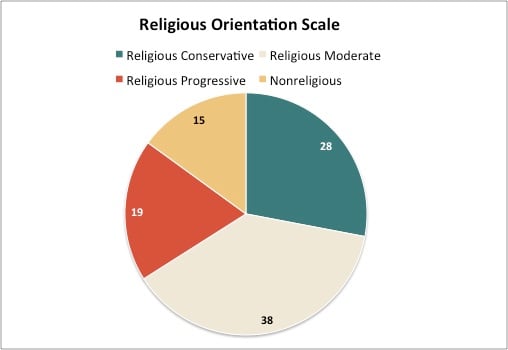 The findings, released Thursday (July 18), are part of a report by the Public Religion Research Institute and the Brookings Institution that aims to paint a more nuanced picture of the American religious landscape, and the religious left in particular.

Robert P. Jones, CEO of PRRI, said that Americans’ two views of what makes a person religious harken back to the Protestant Reformation and to the Bible itself.

“This has been a perennial debate through the ages in Christianity,” said Jones. “The Pauline literature, especially in the Book of Romans, makes the case for religious justification by faith alone, while the Book of James seems to state the very opposite — ‘faith without works is dead.’”

“We were curious to see whether this theological debate still has any traction in American religion,” Jones said. “And, lo and behold, it’s still with us today.” But he noted that one side prevails, with those who believe that action defines religiousness outnumbering by nearly 2-1 those who think the key element is faith.

The report, dubbed the “Economic Values Survey,” uses respondents’ views on everything — from God to the Bible to the role of government in the economy — to create a new scale of religiosity that divides Americans into four groups: religious conservatives (28 percent), religious moderates (38 percent), religious progressives (19 percent) and the nonreligious (15 percent.) 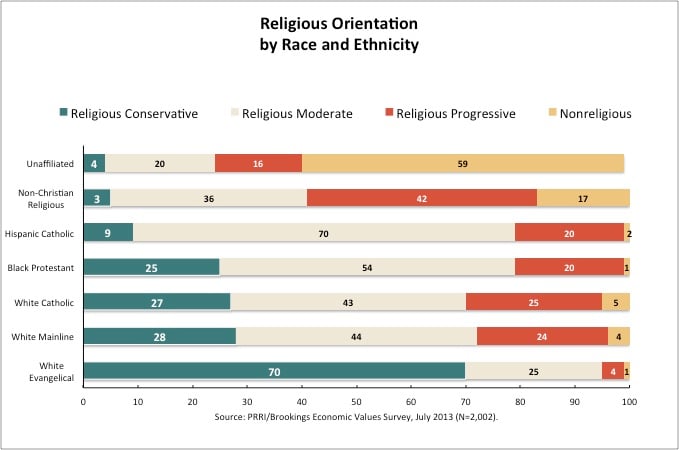 Where do various religious groups fall on the scale?

— The largest group of non-Christian religious people (42 percent) is classified as progressive.

— A strong majority of the unaffiliated (59 percent) are in the nonreligious sector.

The authors say this new scale, taking into account a wide range of beliefs — religious and otherwise — helps clarify the nature of the religious left, which has been studied far less than the religious right.

“The Christian right since the 1970s has been much more of a political force in American life,” Jones said. It’s also easier to study because it is far more homogenous: Seven out of 10 religious conservatives are white Christians, compared to four out of 10 on the religious left, “where a big swath of them are not Christian,” Jones added.

The report also probed the religious aspects of Americans’ views of the economy and economic justice, with survey respondents split on whether capitalism and the free market system are consistent with (41 percent) or at odds with (44 percent) Christian values. The authors note little difference among religious groups on the question.

The gap between rich and poor, an issue raised in recent years most vocally by progressive religious groups, is considered the nation’s most pressing economic issue by 15 percent of those surveyed, coming in fourth behind the lack of jobs, the deficit and the rising cost of health care.

But religiously unaffiliated Americans are more likely to call economic inequality the most serious economic problem than any religiously affiliated group: 27 percent give it top billing, compared to 15 percent of mainline Protestants, nine percent of white evangelical Protestants and seven percent of Catholics.

While the study, consistent with previous reports, shows that religious conservatives outnumber religious progressives, it also seeks to dispel what it calls a common misconception that the “right” side of the religious scale is far heavier than the “left.” 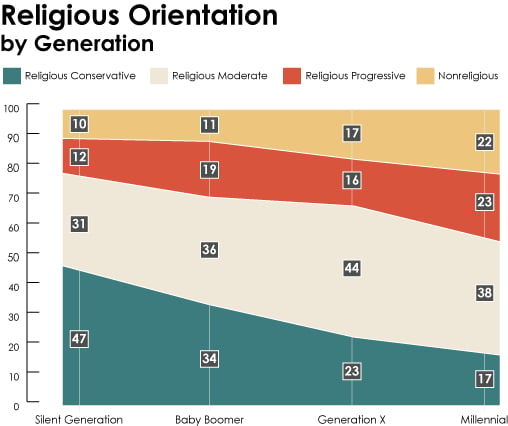 What is often not taken into account in this view is the nonreligious, they argue.

What may bode even worse for religious conservatives is that they skew old. The survey shows that they are heavily represented among the oldest Americans (47 percent) but “make up a smaller proportion of each successive generation.”

The survey of 2,002 adults was conducted between May 30 and June 16 and has a margin of error of plus or minus 2.6 percentage points.