RIO DE JANEIRO (RNS) In one of the most inclusive gestures of his visit here, Pope Francis donned a headdress offered to him from an indigenous South American Indian at a ceremony in the city´s grand municipal theater.

In one of the most inclusive gestures of his visit here, Pope Francis donned a headdress offered to him from an indigenous South American Indian at a ceremony in the city´s grand municipal theater. RNS photo by Robson Coehlo

The gesture was greeted with shouts of surprise initially. Then the audience of Brazilian politicians and business people erupted into roars of approval and thunderous applause.

It was a compelling moment. Moments earlier, the pope had spoken about the state´s responsibility to respect and encourage “peaceful coexistence between different religions.”

Though beset by heavy rain and chilly temperatures that forced last-minute venue changes and compelled many to wear winter clothes, the weather did nothing to dampen participants’ enthusiasm for Pope Francis.

Hundreds of thousands of pilgrims from 190 countries sang, danced and whooped it up through the downpour, waving national flags as they traipsed along the streets of central Rio during the weeklong World Youth Day.

In his numerous appearances, Francis captured their hearts in ways his sedate and intellectual predecessor, Benedict XVI, never could.

Partly, that may be because Francis is the first pope from the Southern Hemisphere; until March, he was Cardinal Jorge Bergoglio of Argentina.

Partly it may be his approachability. Francis delighted the crowds with his informality and spontaneity. 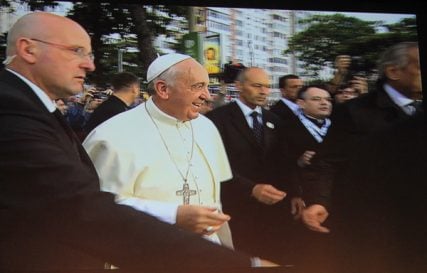 As he begins the culminating weekend of his first international trip, Pope Francis is receiving a wildly enthusiastic reception. Millions of pilgrims, many of whom have traveled far and wide, clamor to hear him speak. RNS photo by Robson Coehlo

On Friday, the screams of the 1.5 million-strong-crowd seemed even more prolonged and intense as Francis abandoned all protocol in his drive to one of the most solemn events of World Youth Day on Copacabana beach, the re-enactment of Christ’s crucifixion, also known as the Way of the Cross.

Descending from his open top popemobile time and again, to the obvious distress of his security detail, he waded into the crowds, kissing old and young.

But this pope also carried a message that he wants to open the church to reform, and that message clearly resonated with his audience.

At Rio´s Metropolitan Cathedral of St. Sebastian on Thursday, he gave some 10,000 young Argentine pilgrims explicit instructions to take to the streets to “make a mess,” and “cause confusion and disorder.”

“I want to tell you what I expect as a consequence of World Youth Day,” he said. “I want to see the church get closer to the people. I want to get rid of clericalism, the mundane, this closing ourselves off within ourselves in our parishes, schools or structures. I want a mess…I want trouble in the dioceses!”

He warned that if the church doesn’t go out and spread the faith it would become an observer rather than a doer.

Rosa Marie de Souza (with the gold wrap around her head), Mãe de Santo of the Candomble faith from Penambuca, stands with children holding signs in north Brazil at the mass on Copacabana beach. RNS photo by Robson Coehlo

Possibly realizing the alarm his words are likely to cause among traditionalists, Francis apologized in advance to bishops worldwide for the defiance he is instigating.

“I couldn´t stop crying after I heard what he wants us to do,” said Maria Ines Panuziou, a 31 year old Argentine. “It is so different and exciting.”

Some suggested the new pontiff might even stem the exodus of Catholics from the church across the world.

“A lot of people have started coming to confession because of the works of the pope since the beginning of his pontificate,” Gallese said. “So I think that now this will have the same effect on the young people who are present here.”

Francis also appeared to be winning approval from other faiths. Rosa Marie de Souza, a leader of the African-based religion, Candomble in Penambuca, traveled more than 2,000 miles with a dozen of her followers to attend the festival.

“His warmth and respect for all faiths is inclusive, and we felt encouraged to be here today,” she said.

On Friday, five young people —  three Brazilians, one Venezuelan and one Italian — chosen by lottery during the registration for World Youth Day had the opportunity to make the sacrament of reconciliation, or confession, before Francis.

“I have not really been a practicing Catholic for some time,” said one of them, Renan Sousa, a 22-year-old from northeast Brazil. “But after meeting the Holy Father, I feel totally refreshed and committed to practicing my faith.”

In today’s address to business leaders, the pope avoided all criticism of the organizational problems that have beset the festival.

Pope Francis in his popemobile on the way to Copacabana Beach for the re-enactment of the Way of the Cross. RNS photo by Robson Coehlo

The grounds of the stadium in Guaratiba where the vigil was meant to be held Saturday and the closing Mass Sunday (July 28), were so badly waterlogged by heavy rains that the venue was closed and the activities moved to Copacabana beach.

Pope Francis had specifically chosen Guaratiba in the west of the city as the location for the final events because he wanted the poorer communities in Rio to attend.

Despite predictions of rain, Rio was basking in brilliant sunshine Saturday.  It reflected the mood of Francis’ audience.

As the event for Brazilian business leaders and politicians came to a close, Francis was surrounded by dozens of young girls who knelt by his feet and offered him flowers.

Then, in a spontaneous ovation, the crowd clapped and repeatedly shouted his name —  “Francisco.”