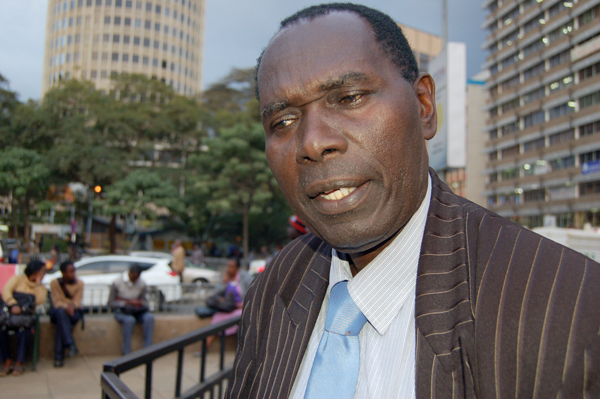 Dola Indidis, a Roman Catholic, is petitioning the International Court of Justice, based at The Hague, to nullify Jesus’ conviction and death sentence. Photo by Fredrick Nzwili
July 30, 2013
Fredrick Nzwili

NAIROBI, Kenya (RNS) The conviction of Jesus by Pontius Pilate may be the most famous court verdict ever -- and perhaps the most consequential, since it led to Christ’s crucifixion and the founding of a global religion.

Dola Indidis, a Roman Catholic, is petitioning the International Court of Justice, based at The Hague, to nullify Jesus’ conviction and death sentence. Photo by Fredrick Nzwili

Now a Kenyan lawyer wants to overturn Pilate’s decision, though he wants to keep the faith that flowed from it.

“The selective and malicious prosecution (of Jesus) violated his human rights,” said Dola Indidis, a Roman Catholic who is petitioning the International Court of Justice, based at The Hague, to nullify Jesus’ conviction and death sentence.

Indidis, a former spokesman for the Kenyan judiciary, accuses Pilate, who was the Roman governor of Judea, of “judicial misconduct, abuse of office, bias and prejudice.”

That may well be the case, at least in the view of believers and many Bible scholars. But getting a court to rule on a 2,000-year-old case from an outlying province in a long-defunct empire will not be easy.

Indidis first brought his case before the Kenyan High Court in Nairobi in 2007, but the court refused to hear it, saying it lacked jurisdiction.

Now he is turning to the International Court of Justice, often referred to as the World Court, which is best known for ruling on territorial disputes between members of the United Nations.

Officials at The Hague would not confirm or deny that they have received a petition.

But Indidis seems undeterred and points to the example of Joan of Arc, the 15th-century saint who led the French to major victories against the English before she was captured and burned at the stake. A quarter-century after Joan’s death her conviction was overturned by a papal court, and in 1920 she was canonized.

Indidis’ petition has surprised Christian leaders in Kenya. The Rev. Maloba Wesonga, a spokesman for the Catholic Archdiocese of Nairobi, said the exercise was futile, at least from a theological point of view.

“As we know it, the trial had to happen,” said Wesonga. “We must understand that Jesus was not vulnerable and nobody can do justice to God.”