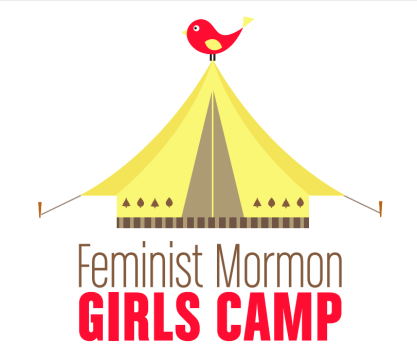 The Feminist Mormon Girls Camp logo. What it says to me is that camp is fun! And that Mormonism is a very big tent.

I’ve spent the last two days attending the world’s first-ever Feminist Mormon Girls Camp. Held in the Utah mountains, it’s been a gathering not just of teenage girls and their leaders, as is traditional for LDS Girls Camp (now called Young Women Camp), but whole families, including spouses and tiny tots.

It’s been a marvelous experience. I believe the effort first came about because of women’s online conversations about their own experiences at LDS camp as kids, which were generally (but not always) positive, and their concerns about how camp may have changed since then. Today, from the stories I hear, LDS camp is as likely to fixate on the dangers of immodest dress as it is to teach girls that they are strong, beloved, and capable. Some women felt that camp’s focus had moved away from self-reliance toward ornamentation. 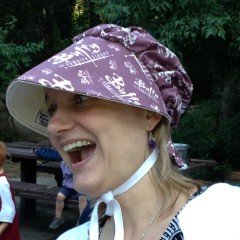 There were feminist bonnets for sale at camp, but I arrived too late to snag this Buffy one. I am going to special order it.

These moms wanted more than crafts and modest fashion lessons for their daughters. They dreamed it, and then they created it: Feminist Mormon Girls Camp.

This first year was just a small pilot program; the organizers had to be careful not to get too far ahead of themselves. It is not requisite that a woman should run faster than she hath strength. So they only invited a few charter families, with the possibility of expanding it in future if people are willing to take the lead. There are representatives here from Feminist Mormon Housewives, Sistas in Zion, Ordain Women, Let Women Pray, Young Mormon Feminists, and many others. 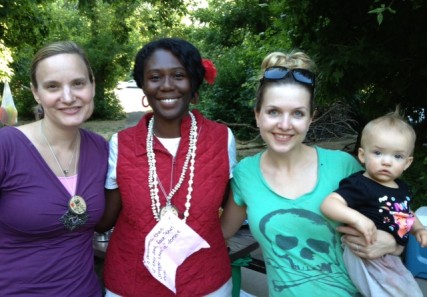 Me with Zandra Vranes of Sistas in Zion (center), Lindsay Hansen Park of the FMH podcast, and a member of the next Mo Fem generation

So what have we been up to? Plotting civilization’s downfall, of course. Isn’t that what feminists always do? No, actually, we have mostly been having fun, singing songs and hymns (some with Mother-in-Heaven-inclusive lyrics), eating too many S’mores, and talking.

And talking some more.

My absolute favorite part of the event is that I was assigned to be a certification counselor, which basically means that I helped the kids earn badges by talking about world and church issues, and getting them to use their imaginations about how the world might become a different place.

We started off with some of the “First Wave Feminism” questions and tasks, including:

It was a treat to hear kids recite to me, “Virtue can only flourish among equals” (Mary Wollstonecraft) or “The best protection any woman can have…is courage” (Elizabeth Cady Stanton), and to teach them a bit about the women who had come before. And it was a treat to hear about the things that make them mad: that girls aren’t valued in China, that puppy mills exist, that kids are starving in the world, and that women can’t bless their babies or pass the sacrament in the LDS Church.

And for the second wave of badges, we read aloud some quotes from Friedan’s The Feminine Mystique and rewrote fairy tales so that nobody had to rescue the heroine. 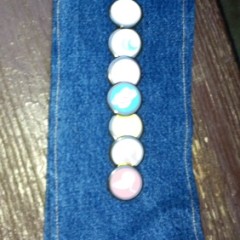 One of the girls who earned all of the available badges let me photograph her sash. Here’s to the next generation.

The kids could also work for badges in Third Wave Feminism, personal empowerment, spirituality, Mormon feminism, and subversive activism, which includes writing a protest letter to a company or leader and sending it out.

Some of the kids worked very hard and earned every single badge, as you can see from the sash pictured above. At last night’s campfire, after the Girl Power skits and before the beautiful testimonies of friendships made and faith renewed, proud girls and boys received their sashes.

And my heart swelled.

These kids are the future, and the future is a brighter Mormon world.