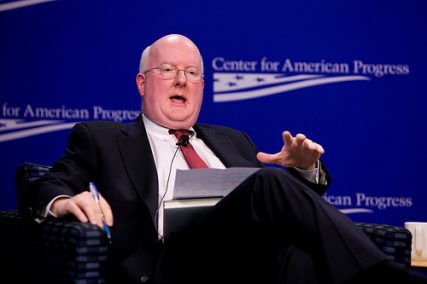 Casey is a professor of Christian ethics at Wesley Theological Seminary in Washington and advised President Obama’s campaign and other Democrats on outreach to religious voters.

Kerry praised Casey as someone who understands how the U.S. can engage religious communities around the world to foster peace and development.

“In a world where people of all faiths are migrating and mingling like never before,” Kerry said, “we ignore the global impact of religion at our peril.”

Casey said he and Kerry have long shared a view about the role of religion in the world, that it neither “poisons everything” nor can “save and solve everything.”

“You knew that the reality was somewhere in between,” Casey said, addressing Kerry under the chandeliers of one of the State Department’s most opulent halls.

Casey, who will take a temporary leave from Wesley to assume his State Department post, said he hopes to “build strong relationships with religious actors abroad to collaborate on a variety of fronts, from conflict prevention and mitigation, to promoting human rights, to fostering development.”

A small but vociferous group of religious advocates — including scholars and clergy — have long pushed the U.S. to take a more robust stand in defending the rights of religious minorities abroad.

“I would put this under the rubric of wait-and-see,” said retired Ambassador Randolph Bell, who runs the First Freedom Center, a Virginia-based religious freedom watchdog group. 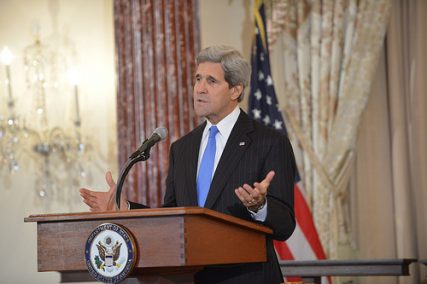 U.S. Secretary of State John Kerry delivers remarks at the launch of the Office for Engagement With Faith-Based Communities at the U.S. Department of State in Washington, D.C., on August 7, 2013. [State Department photo/ Public Domain]

While the best policy directly and emphatically insists on religious freedom abroad, Bell said, “if this can lead to an increase in the salience of these rights, let’s give it a chance.”

“It’s a positive and timely step that should increase the State Department’s ability to effectively engage religious actors, as issues of religion and state are more relevant than ever” after the Arab Spring, Thames said.

“Hopefully, this office can help position the U.S. to convey our values and the importance of religious freedom during this time of global transition.”

The State Department has an ambassador-at-large for international religious freedom, currently Suzan Johnson Cook, although critics have said she and her predecessors have been sidelined in the department’s vast bureaucracy.

USCIRF has repeatedly taken the State Department to task for going soft against foreign governments that restrict religious freedom and refuse to protect vulnerable religious minorities.

Since 2001, the White House has had a similar office — the Office of Faith-based and Neighborhood Partnerships — which has been headed by a succession of directors with strong religious credentials.

The current head of the White House office, Melissa Rogers, former general counsel to the Baptist Joint Committee for Religious Liberty, on Wednesday welcomed Casey as a public servant who understands the “potential for religious communities to spark both positive and negative movements.”

Casey, the author of “The Making of a Catholic President: Kennedy vs. Nixon 1960,” was named by Religion News Service in 2006 as one of a dozen Democrats who were helping the party make inroads among religious voters.