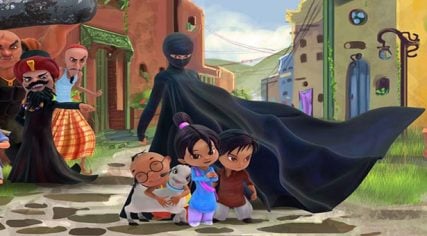 The fictional show coincides with the real life of Malala Yousafzai, the teenage Pakistani student who was shot in the head in an unsuccessful bid to kill her because she spoke out in support of girls’ education.

The Burka Avenger has been mostly victorious against her Taliban-like enemies during the first two shows, which began on July 28.

"Soon we will have an international launch," the show's Facebook page said on Wednesday (Aug. 7).

"We will make sure that everyone gets a chance to watch Burka Avenger fight for justice, peace and education for all."

The show broadcasts in the Urdu language, but offers a 2-minute 10-second trailer in English on YouTube. It airs on Geo Tez, part of the GEO network, at 6 p.m. prime time on Sundays in Pakistan.

Set in a "land of Halwapur," the Burka Avenger leads three idealistic schoolchildren who speak about the importance of education for women, while their violent enemies say girls should not go to school.

Those foes include Baba Bandook, an evil magician with vampire teeth armed with a flamethrower.

Bandook's ally is a bald, corrupt politician wearing a dollar sign medallion necklace who wants to close the school and steal its money.

Rashid sings a theme song, which includes a chorus in English: "Don't mess with the lady in black."

"She doesn't punch,” Rashid told CBS News. “She doesn't hit, she doesn't kick, she doesn't shoot anybody. All she does is clonk people on the heads with books or throw pens.”

"So there's an underlying message with that -- the importance of education -- and the pen is mightier than the sword.”

But the burka, also spelled burqa, has some activists concerned -- not the Taliban, but a handful of Western-educated Pakistanis who object to the sheetlike covering worn in public by many devout Muslim women.

Marvi Sirmed, a human rights activist, told CBS the burka is "a tool of oppression" and "a symbol of submission of women.

"It cannot be used as a tool of empowerment," Sirmed said.

Rashid defended the character's costume. By day, the avenger is also a mild-mannered teacher named Jiya. In that role, she does not wear a burka or a headscarf.

But by night, her black burka is tight, instead of the traditional baggy style, and shows only her eyes and fingers, which are adorned with matching black nail polish.