I had a wonderful, if soggy, time at the Wild Goose Festival this weekend in North Carolina. Today, as I air out my tent and wash the various items that got caught in our campsite’s rivers of mud, I’m reflecting that:

1) It was an amazing gathering of people, and

2) I am so going to stay in a B&B next year. Did I mention the rivers of mud?

Here are five of my favorite things from this summer’s Festival, in no particular order except that the Indigo Girls are awesome and they have to come first.

The day it was announced that the Indigo Girls were headlining the Festival, I blogged here in some wonderment that the Festival organizers had managed to peg my tastes so perfectly. Turns out I wasn’t the only one. On Saturday night, in between rainstorms, the mainstage’s lawn was covered with fans like me who swore to their companions that they wouldn’t sing along to the duo’s classic folk rock lyrics but then wound up belting them out anyway. At the end of the concert Amy Ray said they would come back again sometime. I hope that’s true, since it’s clear that there are many IG fans in the Wild Goose community. 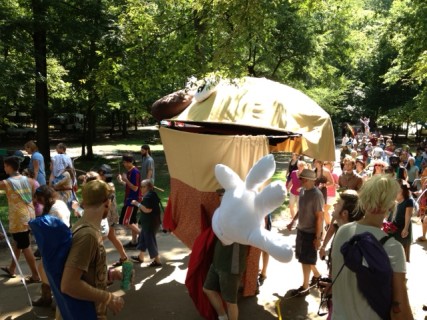 Yeah, that’s a gigantic puppet head in the closing parade. I’m not sure why either. Just work with it.

New this year, the “Elders Sessions” were held on two different mornings, as “On Being” host Krista Tippett interviewed civil rights activist Vincent Harding and the radiant author-publisher-theologian Phyllis Tickle. The organizers explain the idea behind these sessions in this way:

The wisdom and energy of elders has been valued and honored—and paid attention to—in cultures throughout human history, but recent times have often seen “new” idolized at the expense of “grounded.” We’re blessed to have with us at Wild Goose elders of the movement for love and justice. There are many among us who have worked for decades to embody beloved community, and we want to pay attention.

The interviews were terrific, though never long enough. It was great to see the Festival honoring our sages as well as the many young and energetic voices around. (One twenty-something in our camping group had never heard of the Indigo Girls. I am now officially old.) 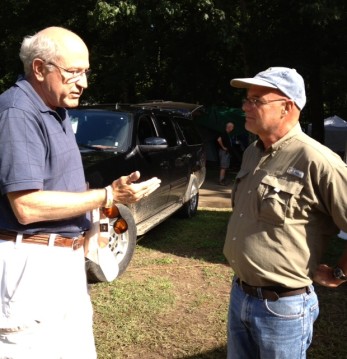 The Wild Goose Festival has become a kind of locus for the Emergence movement, and the lineup of speakers included a number of clear leaders in that camp (Brian McLaren, Nadia Bolz-Weber) as well as some Christian authors who straddle multiple readerships (including Philip Yancey, one of my favorite writers — watch the blog later this week for a Q&A I did with him at the Festival). What you know for sure about the Festival is that you’re going to hear great preaching and challenging ideas.

Over the weekend I was interviewed by two bright and shiny young men from the Revangelical podcast, which seeks to build bridges across theological divides. One of the guys, Brandan Robertson, is a senior at Moody Bible Institute. As he explained it to me, their podcast used to be on the institution’s radio network but then they got booted off as punishment for interviewing Brian McLaren. (Horrors!) So now Revangelical is independent and thriving, “working towards a better Christianity for us all.” Talking to them reminded me again of what a democratizing force the Internet has been; through blogs and podcasts like Revangelical, progressive religious people have been able to find their cohorts even outside of established institutions and programs.

Talking with them also made me sanguine for the future. If the rising generation is asking these important questions of religion and themselves — and doing so with humility and humor — then there’s a lot of reason to be hopeful.

And finally, just like last year, one of the best parts about the Goose was the impromptu conversations all around the camp. The Darkwood Brew television show had set up a coffeehouse with wifi and a charging station, which was very popular because there was no cell phone reception to be had in Hot Springs.* I sat there for hours just talking to various people while we tried to dodge the rain. And every evening, my Ohio friends and I welcomed people to our campsite for delicious, if slightly sodden, dinners and rousing talks. I’m reminded of this joyous Carrie Newcomer song:

There’s a gathering of spirits

There’s a festival of friends

And we’ll take up where we left off

When we all meet again.

* Having no cell phone was especially inconvenient for me this weekend because I was eagerly awaiting news of the births of my new twin nieces! Born on Saturday, they are fine and healthy.