Rageh Omaar travels to the place of Muhammad's birth to retrace the footsteps of the prophet in PBS' "Life of Muhammad". Photo courtesy PBS
August 15, 2013
Menachem Wecker

(RNS) He’s born poor. By age 6, he’s an orphan. Two years later, he loses his grandfather. Yet he overcomes his circumstances, develops a reputation for business integrity and progressive views on marriage.

Then he becomes a prophet of God.

The portrait of the Muslim prophet, which emerges from a PBS documentary “Life of Muhammad,” may surprise some American viewers.

“As major polls by Gallup, Pew, and others have reported, astonishing numbers of Americans, as well as Europeans, are not only ignorant of Islam but have deep fears and prejudices towards their Muslim populations,” said John Esposito, professor of Islamic studies at Georgetown University who appears in the three-part series that debuts Tuesday (Aug. 20) on PBS.

Esposito praised the series’ “balance,” and its attempts to describe controversial aspects of the prophet’s life with a diversity of opinions.

Produced for the BBC in 2011, the series examines the world into which Muhammad was born and his marriage to his first wife, Khadijah. The second hour focuses on the “Night Journey to Jerusalem,” his departure from Mecca and the eight-year war with the Meccan tribes. The third analyzes events during his later life, including the introduction of the moral code known as Shariah and the concept of jihad.

Rageh Omaar travels to the place of Muhammad's birth to retrace the footsteps of the prophet in PBS' "Life of Muhammad." Photo courtesy PBS

Narrated by Rageh Omaar, a Somali-born journalist, the series presents Muhammad in a respectful, positive light, though it doesn’t shirk from the controversies that surround Muhammad, who was born in Mecca in 570 A.D.

For example, viewers are given several views of Muhammad’s many wives.

“When (a prophet’s) revelations give him more sexual partners than anyone else is allowed to have, I say we have some reason for suspicion,” said David Wood, a teaching fellow at Fordham University, in the series.

But narrator Omaar also notes that the prophet took new wives only after the death of his first wife of 24 years.

A significant portion of the second chapter of the documentary addresses Muhammad’s treatment of the Jewish tribes of Medina, or Yathrib, as it was originally known. According to Islamic tradition, the Jews collaborated with Muhammad’s enemies from Mecca, the Quraysh, thus voiding the Medina constitution that Muhammad created, which protected Jews’ safety.

Other sources in the film suggest the Jews of Medina betrayed Muhammad due to their trade ties with the Quraysh, and refused to join Mohammed in a key battle because it took place on the Sabbath.

The film avoids depicting the prophet visually, in line with Islamic prohibitions against figural depictions of the prophet.

Tariq Ramadan, a professor of contemporary Islamic studies at University of Oxford, says in the film, “We never represent or have any images of any of the prophets.”

But the Metropolitan Museum of Art owns a 16th century Islamic manuscript that depicts the prophet without a veil, and other scholars, who are not cited in the documentary, question the characterization of Islam as anti-figurative.

Michael Barry, a lecturer in Near Eastern studies at Princeton University, noted that sultans from present-day Turkey, Iraq, Iran, Afghanistan, and India commissioned representations of the prophet.

“Whether modern fundamentalists like it or not, those figurative representations exist in the hundreds as historic fact,” said Barry. 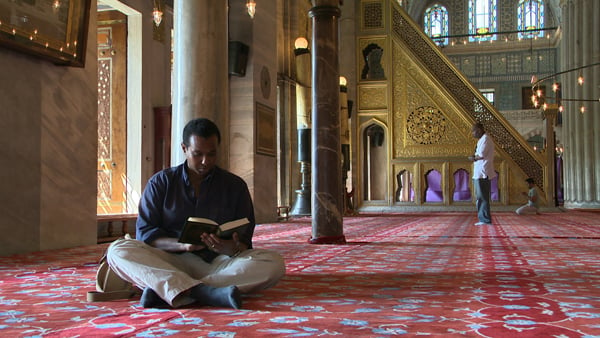 Rageh Omaar travels to the place of Muhammad's birth to retrace the footsteps of the prophet in PBS' "Life of Muhammad". Photo courtesy PBS

Faris Kermani, the documentary’s producer and director, said through a publicist that the editorial decision was made to respect the “current Muslim view, understanding that historically this has not always been the case.”

Kermani said a wide range of scholars were interviewed for the film, yet it doesn’t embrace any particular perspective of those scholars.

Abdurraheem Green of the Islamic Education and Research Academy in London, for example, has made controversial statements about the 9/11 attacks, and although news accounts have reported that he has multiple wives, the documentary doesn’t note that fact when he is interviewed about polygamy.

Omaar’s signoff at the end of the three-hour documentary attempts to contextualize all of the stories—flattering and damning—surrounding the prophet.  “He left Arabia a better place than he found it,” Omaar says.

Ibrahim Hooper, the national communications director for the Council on American-Islamic Relations, said he welcomed educational materials about the prophet’s life, though he hasn’t seen the series.