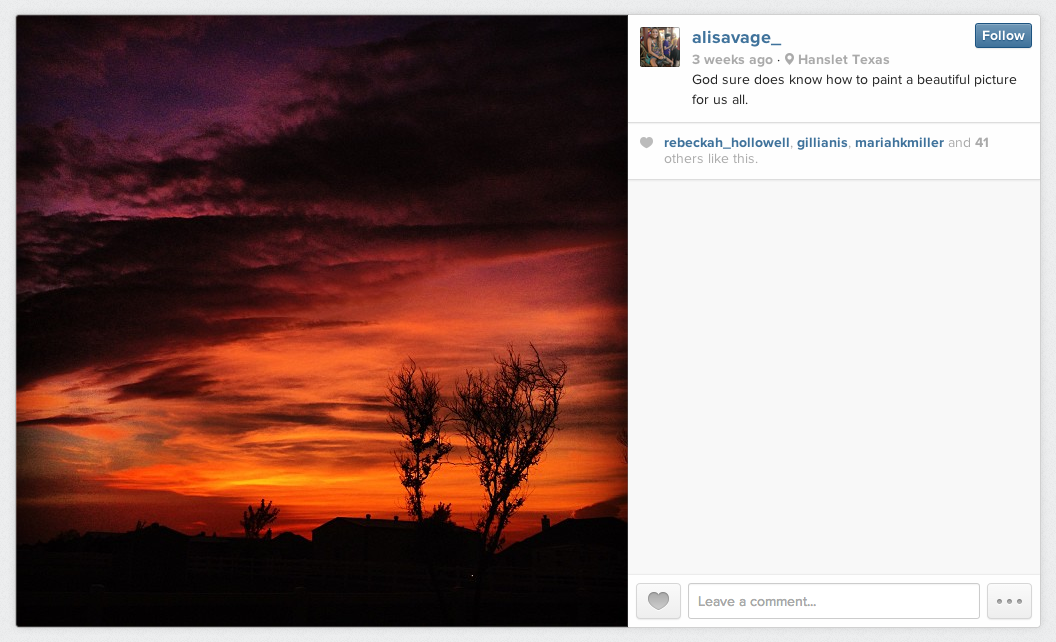 "God sure does know how to paint a beautiful picture for us all." Instagram post.
August 22, 2013
Menachem Wecker

(RNS) Sunrises and sunsets are inspiring religious adoration of a digital sort.

Even Carrie Underwood is getting in the act.

“The good Lord sure is a great artist!” the country singer tweeted with an Instagram photo of a snowcapped mountain.  The post generated more than 50,000 Instagram likes, more than 1,000 Twitter likes, and more than 600 retweets.

The notion of God as an artist is hardly new. In the Middle Ages, the concept of a divine artist, or architect, was often invoked. The biblical artists Bezalel and Oholiab are described as being “full of the spirit of God.” In Catholic art, angels often guide St.

Luke’s hand when he draws the Virgin.

But when Twitter and Pinterest users take to their smartphones to snap pictures of sunrises and sunsets and attribute those “masterpieces” to God, they are exhibiting a new sort of adoration.

Magnificent sunsets and sunrises remind observers “how much there is out there in our own reality that is ineffable, and therefore how much the more so God is, Who is beyond our reality,” said Ori Soltes, a lecturer at Georgetown University and author of several books on religion and art.

But the tweets and Instagram posts present a very safe portrait of God, said Scott Thumma, sociologist of religion at Hartford Institute for Religion Research.

Many of these believers have traditional images of God, and their tweets are often crafted so as not to offend.

“It is a way to talk about God’s immanence, power, and creative role without quoting scripture or having a theological discussion,” Thumma said, noting that the divine artist is “a substantial change away from God as vindictive judge or harsh father.”

“I never see images of the dead from bomb blasts, storm destruction, melting glaciers, the homeless and starving masses as also being evidence of God’s handiwork around us,” he added.

“I would look out and see the sun set over the Palo Duro Canyon, and it was as if God would just be saying, ‘I’m still here. I’m still working; even if you can’t see me, I’m present,’” he said.

“To many people, there isn’t much special about a sunset or sunrise other than the colors in the sky,” he said. “To me, it’s one of God’s many gifts to us.”