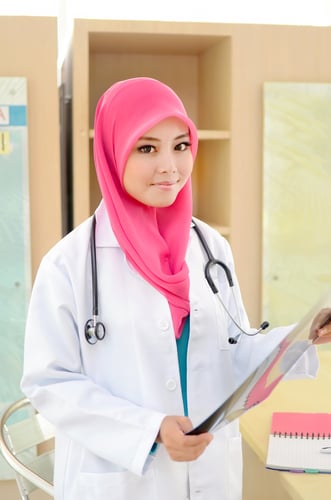 A doctor wearing a hijab.

The Parti Quebecois neither confirmed nor denied details of an Aug. 20 report in the daily newspaper Journal de Montreal that leaked parts of the so-called Charter of Quebec Values, which the government had promised to introduce this fall.

On Thursday (Aug. 22), Pauline Marois, the premier, and Bernard Drainville, minister for democratic institutions and active citizenship, confirmed the government intends to proceed with a bill soon.

“These proposals are very balanced,” Drainville told reporters in Quebec City. “It’s a good balance between respect for individual rights and the respect of Quebecers’ common values.”

The party has minority status in the provincial legislature and will need the support of at least one opposition party for the measure to become law.

Past polls have indicated most Quebecers do not want public workers wearing religious symbols.

Jewish leaders met with Drainville on Aug. 19 to express their opposition to the plan.

“Wearing a kippa (yarmulke) or a Star of David is a matter of personal choice and does not compromise one’s impartiality,” said Victor Goldbloom, former chairman of the Quebec Jewish Congress.

If the measures become law, “I don’t know if I’d be able to stay here in Quebec,” said Dr. Sanjeet Singh Saluja, a turban-wearing Sikh who works in a Montreal emergency room.

The Journal de Montreal interviewed headscarf-wearing day care workers who said they would quit their jobs if forced to choose between their religious beliefs and their work.