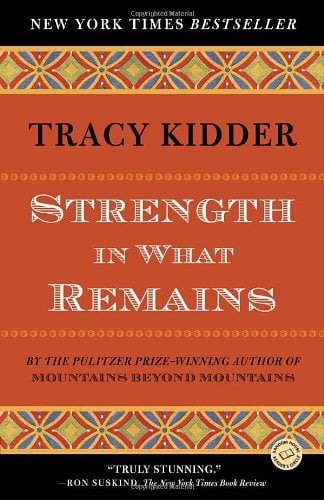 The story of Deo's courage -- and Sharon McKenna's bossy Samaritanism -- is told in this engrossing book by Tracy Kidder. (Amazon)

Over the past few weeks I’ve been working on a magazine article about women religious leaders who went to Wellesley, my alma mater. I’ve interviewed some remarkable people for this story, including a woman who was the first ordained female leader of the Presbyterian Church (USA), a Muslim author who travels as a sort of goodwill ambassador for the State Department, and a Zoroastrian philanthropist.

But the story I can’t get out of my mind is the one about the retired nun.

The simple version of this story is that in New York in 1994, retired nun Sharon McKenna chatted with a young grocery delivery guy who seemed down on his luck. He was ill and spoke no English, so she managed to communicate with him in French. Whereas most of the grocery customers wouldn’t even acknowledge him with a dollar tip, she learned his story, got him to a doctor, and found him a place to live in the city. From there she helped him enroll in university.

But he wasn’t just down on his luck. He was a refugee, a Burundian survivor of the Rwandan genocide, who had just spent six months fleeing terrible violence and who believed all his family to be dead. At home, Deogratias Niyizonkizaha had been training to be a doctor before his education was interrupted by ethnic genocide; how he wound up in the US at all is a story told at length in the riveting book Strength in What Remains by Tracy Kidder.

The book recounts a lot of details, both terrible and marvelous, that Sharon omitted in her conversation with me. One thing that comes across clearly is that before Deo met her, he had encountered countless other people who could have helped him, including an international journalist who exploited the entire painful story of his past but did nothing to assist in changing the story of his future. But Sharon never seemed to hesitate about getting involved.

Another thing that strikes me in the book is how bossy Sharon was, refusing to take no for an answer—the most meddlesome Good Samaritan ever. She was a saint, but she wasn’t so much indomitable as endearingly domineering.

Deo was able to complete his undergraduate degree at Columbia University—was there, in fact, at precisely the same time I was doing my graduate work at Columbia, though we never met. What if we had, I wonder? Would I have gone the extra mile?

I’m not sure. But I’m grateful that someone did, or a series of someones; Sharon’s acts of generosity opened the door for other people to lend a hand. Thanks to them and to his own incredible persistence, intelligence, and determination, Deo went on to attend the Harvard School of Public Health and the Dartmouth School of Medicine. He then founded Village Health Works, a medical clinic in Burundi that has served more than 50,000 people in its first four years of operation.

And by the way, the clinic’s name is the Sharon McKenna Health Center. Deogratias, indeed.