(RNS) As Syrian President Bashar al-Assad uses chemical weapons at the outskirts of Damascus and President Obama mulls a U.S. military response, some theologians hope for an alarming endgame to the 30-month-long Syrian conflict.

For these Christians and Muslim, the civil war in Syria heralds nothing less than the Second Coming of Jesus Christ.

Before you label the premise as a conspiracy theory, consider that there are a number of Muslim videos and several Christian websites — not to mention conservative talk radio shows — all making promoting versions of this unfortunate connection. And that’s wrong.

The Judeo-Christian and Muslim texts mention Damascus as an important landmark in the geography of the Second Coming. To some Christian and Muslim scholars it was only a matter of time before the conflict would reach Damascus. So keen are they to share their analysis that the moment you say, “Damascus,” they say, “Ask us!”

Isaiah 17 then ends with a vision of Armageddon, which brings Jesus Christ on the scene. Jeremiah 49 and Zechariah 9 make similar violent references regarding the fate of Damascus.

Ask my Muslim friends and they quote Chapter 4 verse 159 of the Quran which indicates the Second Coming of Jesus. Prophet Muhammad prophesized “Allah would send Christ, son of Mary, and he will descend with the white minaret, east of Damascus, wearing two garments lightly dyed with saffron and placing his hands on the wings of two Angels,” thus directly linking Damascus with the Second Coming. Surprised?

While a majority of Muslims and Christians agree with the idea of a physical Second Coming of Jesus, they disagree on his job description and the exact sequence of events.

The Christian version requires Damascus to be annihilated before Jesus could return to establish the glory of Lord on Earth. The Muslim version requires it to be a flourishing city with enough infrastructure for Jesus to land on the minaret, lead prayers, gather people and then break the cross and kill the swine. The Christian version promises destruction first; peace later. The Muslim version promises peace first; destruction later.

Keeping these theological differences private was possible in the pre-social media world. But today, pulpits are selling doomsday scenarios and pundits are amplifying them in the blogosphere, generating a lasting visceral reaction.

Ask the Judeo-Christian world: have they forgotten Mahmoud Ahmadinejad’s comment about erasing Israel from the face of the Earth? Ask the Muslim world: have they forgotten George W. Bush’s post 9/11 declaration of the war on terror being a “crusade.” Who’s to say that political decisions are immune from such eschatological yearnings? As the war engulfs Damascus, one wonders if our actions or inactions are partly motivated by religious beliefs.

At this critical juncture, where some religious leaders have issued an all-out warning of World War III, quoting the Bible to support the “annihilation of Damascus” is like poking at an inflamed appendix; don’t manage it promptly and it may rupture, triggering a much larger regional war.

I respect all religious texts. The idea is not to reject them but to reinterpret them. There’s got to be a more believable way to understand these quotes.

Christians should analyze Isaiah 17 in ways that spare one of the oldest cities in the world and its 2 million inhabitants. And Muslims should at least conjure the scientific challenges associated with the idea of Jesus physically descending on a minaret in Damascus in a world of drone surveillance. 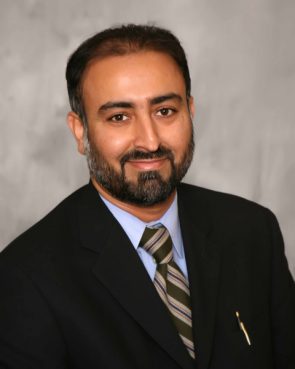 Dr. Faheem Younus is a clinical associate professor of medicine at the University of Maryland. He is a frequent lecturer about Islam, winner of the Presidential Service Awardan award, and the founder of Muslimerican.com. Photo courtesy Dr. Faheem Younus

Instead of praying for the annihilation of the Arab cultural center, why not try saying: we will not tolerate these human rights abuses. Instead of trying to “assist God” with our inaction, why not say that we are willing to help you in any way possible. Just ask us, Damascus.