VATICAN CITY (RNS) Since mid-July, Pope Francis has been using Communion wafers made by an Argentine prisoner in the daily Mass he celebrates at the Vatican’s Santa Marta residence. 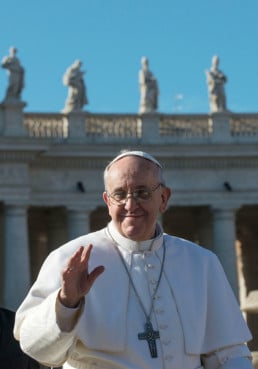 The hosts are made by Gabriela Caballero, a 38-year-old woman who is serving a seven-year jail term in the San Martin Penitentiary outside Buenos Aires.

Her story was revealed by the Argentine news agency NOVA and picked up by Il Sismografo, a blog with close connections to the Vatican.

Caballero gave the hosts, together with a long letter to the pope, to Bishop Oscar Ojea of San Isidro, who regularly visits the prison. Ojea, in turn, delivered the hosts to the pope on July 16 during a visit to the Vatican.

Francis began using the hosts on July 18; the day after he wrote back to Caballero, thanking her for the gift.

“From tomorrow on I will celebrate Mass with these hosts and I can tell you it’s very touching for me,” Francis wrote.

“Just reading ‘Dear Gabriela’ was a shock for me, as I’m in a place where I am deprived of my freedom,” she told the NOVA interviewer as she showed the pope’s handwritten note.

“In the middle of this darkness … I am proud to know that one can reach the Vatican even from prison,” she added.

Caballero, who has served three years of her sentence, started her small host-making activity in one of the prison’s bathrooms, using old machines given to her and some other convicts by some nuns.

“Our hosts are handcrafted. Today most machines are digital, have a thermostat … Ours have nothing like that,” Caballero said in the interview.