(RNS) The weeks leading up to the Jewish High Holy Days are supposed to be marked by self-questioning: What failings must I atone for, and to whom must I apologize? 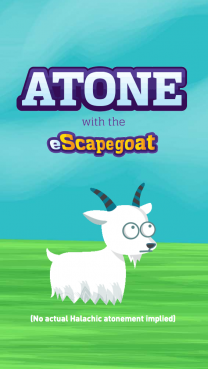 The eScapegoat, an online creation of a San-Francisco non-profit to help people get ready for Yom Kippur, the Jewish Day of Atonement. Photo courtesy G-dcast

A group of artists, writers and animators are hoping a cartoon goat may help.

They call it the eScapegoat, and it’s supposed to approximate the original scapegoat, described in Leviticus as an important player in the atonement ritual of the ancient Israelites, who symbolically placed their sins upon the animal and sent it into the wilderness.

Since its Aug. 8 debut, more than 7,900 people have submitted their sins to the interactive eScapegoat, the work of the non-profit San-Francisco-based G-dcast, which produces whimsical animated short films and mobile apps on the Hebrew Bible and Jewish holidays.

Mostly, they’re not the kind of transgressions that cause too much angst on Yom Kippur, the Jewish Day of Atonement, which begins on sunset on Sept. 13.

“Sometimes I hire a babysitter just so I can go read in my car,” reads one.

“Convenient for me, every Jewish holiday coincides with a major sporting event . . . and will until my boss catches on,” wrote another.

But for some people, the eScapegoat serves as a receptacle for more serious wrongs: “I don’t always treat people as people, but as means to my ends.”

Sarah Lefton, executive director of G-dcast (many observant Jews do not spell out the word “God”), hatched the idea.

The story of the scapegoat is one Lefton reads each year in synagogue during the High Holidays, the 10-day period that begins with Rosh Hashanah, the Jewish New Year, on Sept. 4 and includes Yom Kippur, the Day of Atonement. Jews halted the scapegoat ritual after the destruction of the Jewish Temple in Jerusalem.

“It’s one of the more colorful, tangible, wacky, wooly things in the Bible,” she said.  “And no one seems to know it.”

“How cool would it be,” Lefton thought, “to make a virtual goat.”

With the eScapegoat, you go online, or download the app, and watch a little animated Bible lesson.

“Once a year, on what we now call Yom Kippur, the High Priest placed all the Israelites’ sins on a goat and set it loose in the wilderness,” the website explains.

In Biblical times, a priest symbolically put the people’s sins on a scapegoat to help them atone. Photo courtesy G-dcast

“Today we reflect and try to clean our slates during Elul, the Hebrew month before Yom Kippur.”

The site asks participants their age, but not their name, and provides space for typing in their sins. (One user’s sin was lying about his age.) Then G-dcast wants to know one more thing, as the goat is pictured standing at the edge of a cliff: “Will you be celebrating Yom Kippur?”

The eScapegoat project, which also includes appearances by a live goat tended by G-dcast members at California Jewish gatherings this summer, is funded by a $50,000 grant from the Jewish Community Federation of San Francisco. The mission of G-dcast, according to its website, is to provide easy, fun portals to Jewish learning.

G-dcast staff sends some of the most interesting and entertaining eScapegoat sins to a Twitter feed: @sinfulgoat

The vast majority of people who have used the site seem to be Jewish. But clearly some — with Twitter profiles that express love for Jesus, for example — are not.

And though most of the sins posted are shared to amuse, some people take the site very seriously.

“At first I thought it was a comic kind of thing, and then I realized that even though some of the things seemed funny at first, they weren’t,” said Alexandria Constantinova Szeman, a novelist in New Mexico. For instance, she said, people acknowledging how they tune out others.

Posting her own sin on the eScapegoat “felt good,” she said.

“I’ll basically be atoning for everything,” said Szeman, who chose to enter her full name on the site. “It’s just the state of affairs over here. I’ve more or less accepted this.”

Lefton said she was surprised many people seem to be using the eScapegoat for serious atonement.

“The whole feel of the app is light and funny and we expected people to say, ‘Oh, ha, ha, this is light-hearted atonement,’” she said.

But she added, “If we’re giving people an outlet to reflect on this special time of year,” Lefton continued, “we think that’s awesome.”