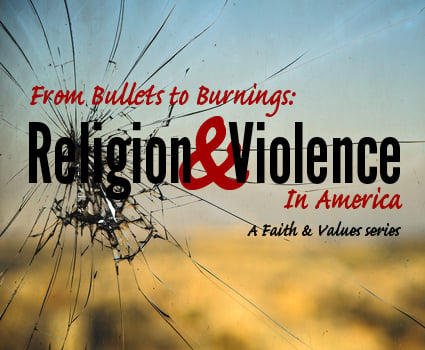 Part 1: The Business of Church Safety

In its first weeklong series, Faith & Values news explores what happens when violence crosses thresholds in churches, synagogues and mosques. Though deadly shootings  happen every week in public spaces, have these incidents become more commonplace in the holiest of places? How are houses of worship responding and preparing to defend themselves from intruders and attacks? To answer these questions, we’ll look at five cities in America and the painful realities, lessons and decisions taking place each day to keep worshipers safe. We begin in Hartford, Conn.  MORE

Indeed, trying to predict and prevent all acts of violence is impossible, whether in a mosque or a church, a movie theater or a school. But developing strategies to prevent and intercept the threat of an active shooter or other potential violent attacks has increasingly become a priority for America’s houses of worship. In Toledo, Ohio, we check the safety pulse of the faithful there following a hateful mosque burning nearly a year ago. MORE

Today’s story looks at the site of another burned mosque, this time in the city of Joplin, Mo. What happens when your worship space burns to the ground, and no one even knows who or what is at fault? How do you go on?  MORE

Part 4: Staying safe while ministering to the mentally ill, poor

In Spokane, churches teeter on a delicate balance of opening their doors wide and locking them tight. One church caters to people who can sometimes be aggressive or hostile as they battle mental health issues and other life challenges. How do they minister to individuals in crisis and keep their own flock safe? MORE

Whether it’s gunshots, fires or fists, when violence touches a congregation it’s felt in ripples, often for years to come. In Whiteville, N.C., one church community’s memories of bombings and murders that happened decades ago still seem raw. Despite the residual shockwaves, the community and those at the center of the horror show steadfast resolve at moving forward, slowly but surely. MORE