VATICAN CITY (RNS) Pope Francis and Jordan’s King Abdullah II reaffirmed that dialogue is the “only option” to end the conflict in Syria, just as the United States and its European allies consider launching a military strike against the regime of President Bashar al-Assad. 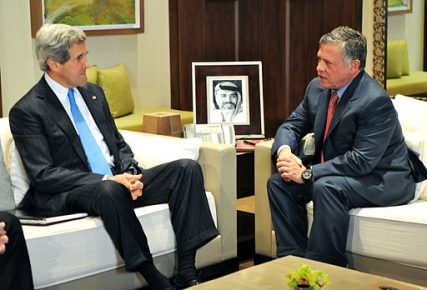 The two leaders met for the first time on Thursday (Aug. 29) at the Vatican. The pontiff and the king, accompanied by his wife Queen Rania, talked in private for 20 minutes.

According to an official Vatican statement, during the meeting “special attention” was given to Syria’s “tragic situation.”

Talks of a possible Western military intervention in the Syrian crisis intensified after reports of a chemical weapons attack against civilians in Damascus last week.

President Obama told PBS’ “Newshour” that he was convinced the attack had been carried out by the forces of Assad but said no decision had been made about action against Syria.

During their Thursday meeting, according to the statement, Francis and Abdullah reaffirmed that dialogue between among all Syrians, with international support: “is the only option to put an end to the conflict and to the violence that every day causes the loss of so many human lives, especially amongst the helpless civilian population.”

The Catholic Church has been following with concern the radicalization of Syria’s civil war. The country hosts a sizable Christian minority, which has mostly sided with Assad during the two-year long conflict.

In an interview with Vatican Radio, Archbishop Maroun Lahham, the vicar for Jordan of the Latin Patriarchate of Jerusalem, said he hoped the “world’s ‘bigs’” would “make peace instead of war and find a peaceful solution.”

Other Syrian Catholic leaders have been even more vocal in condemning a possible Western intervention.

President Assad is a member of the minority Alawite sect with links to Shiite Islam, while most rebels are Sunni, with a growing prominence of Islamist groups with ties to al-Qaida.

Since the beginning of the Syria conflict, neighboring Jordan has seen the influx of hundreds of thousands of refugees. It fears Western intervention will bring more instability to the region.

The country, with its small but dynamic Christian minority, has also been actively promoting Christian-Mulsim dialogue in recent years. Early next month, King Abdullah will host a conference on the role of Christians in the Middle East in Amman, Jordan’s capital.

The issue is deeply felt at the Vatican, which fears that the rise of Islamist movements fueled by the Arab Spring revolutions will threaten the survival of the millenia-old Christian communities in the region.