BOSTON (RNS) Justices of Massachusetts’ highest court examined the nature of the Pledge of Allegiance Wednesday (Sept. 4) as they heard a challenge from atheists who want the pledge banned in schools statewide.

At issue is whether the pledge — and its reference to “one nation under God” — violates the equal rights amendment in the state’s constitution, which prohibits discrimination on the basis of creed. David Niose, president of the American Humanists Association, greets supporters after arguing against the Pledge of Allegiance at the Massachusetts Supreme Judicial Court. Photo by G. Jeffrey MacDonald

“Children every morning are pledging their national unity and loyalty in an indoctrinating format, in a way that that validates God belief as truly patriotic and actually invalidates atheism,” said Niose, former president of the American Humanist Association and now president of the Secular Coalition of America.

Pledge advocates hit back. No one has to say the pledge, they noted, citing a court ruling that confirms the pledge must always be voluntary. What’s more, they said, reference to “one nation under God” does not necessarily affirm theistic belief.

“It’s a statement of our political philosophy,” answered Geoffrey Bok, attorney for the defendants. “It’s the founding thing upon which our country was founded. Our rights did not come from the king or the tsar or the queen. They come from something higher.”

Oral arguments took just 35 minutes. The case pits plaintiffs against Acton, Mass. schools and the regional district. The schools won a lower court ruling and continue to defend the pledge with support from the state.

The case also marks a new front in atheists’ long battle to remove “one nation under God” from the start of children’s school days. Prior efforts failed as federal courts ruled the pledge doesn’t violate a constitutional ban on state-sanctioned religion and is an act of patriotism, not religious observance. 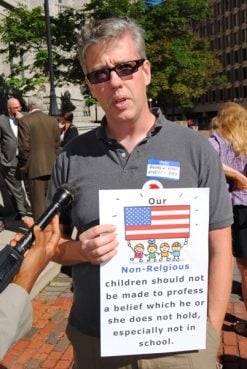 Andrew Hall, an atheist and father, demonstrates Wednesday outside the Massachusetts Supreme Judicial Court. He says recitation of the pledge of allegiance in schools should be deemed unconstitutional in Massachusetts. Photo by G. Jeffrey MacDonald

Now challengers are taking a new tack by arguing the pledge violates the Massachusetts’ equal rights amendment, which provides that “all people are born free and equal,” and that equality cannot be abridged by “sex, race, color, creed or national origin.”

Pledge advocates say they expect to prevail, but add that a loss would likely galvanize pledge opponents to bring similar suits in other states’ courts.

“The challenge for the plaintiffs is in showing that they’re being coerced to do something that creates this separate status,” said Greg Kalscheur, a Jesuit priest and expert in church-state law at Boston College Law School. “Participation [in the pledge] is voluntary. Nobody can actually be forced to participate. So I think it’s a challenging argument to make and to sustain.”

Proceedings took place in a setting where public references to God have a long history. The courthouse is named for John Adams, the Founding Father, who, in 1780 wrote numerous explicit references to God into the Massachusetts constitution. When a court officer called Wednesday’s session to order, he shouted, “God save the Commonwealth of Massachusetts!” – a phrase picked up moments later by Chief Justice Roderick Ireland.

“Would your client say that is inappropriate language?,” Ireland asked Niose, referring to the court officer’s words.

“It can’t be compared to a daily, 13-year indoctrination,” Niose answered, “when children are, every day when they go to school, instilled with this idea that we are one nation under God and true patriots can stand up and say that.”

The court’s seven justices took turns pushing both sides to unpack how a patriotic observance does or doesn’t violate the state’s equal rights amendment.

Outside, opponents of the pledge outnumbered supporters. About two dozen applauded Niose on the courthouse steps. Among them was Andrew Hall, a local atheist and father who said his eight- and 11-year-old children face pressure to say the entire pledge, even though it’s supposed to be voluntary.

“There is coercion involved,” Hall said. “It creates two different classes of kids… If other kids see my children not say ‘under God’ under the pledge, that creates a certain amount of stigma.”

A decision in the case is expected within five months.

CORRECTION: This article originally misstated David Niose’s current and past affiliations with the American Humanist Association and the Secular Coalition of America.