America’s Founding Fathers flagged religious freedom as a fundamental right in the very first line of the First Amendment to the Constitution:

Congress shall make no law respecting an establishment of religion, or prohibiting the free exercise thereof; or abridging the freedom of speech, or of the press; or the right of the people peaceably to assemble, and to petition the Government for a redress of grievances.

In my new blog On Freedom, I’ll be exploring freedom of religion and belief in the U.S. and well beyond the First Amendment’s reaches. 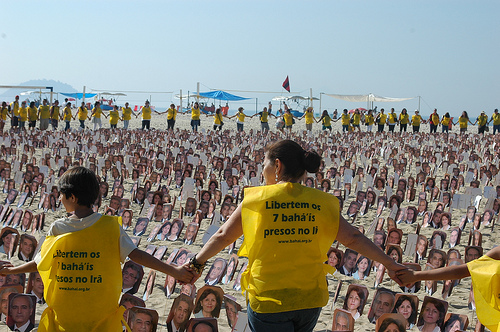 The global state of religious freedom – Hundreds of human rights supporters gathered in Rio de Janeiro, Brazil, in June 2011 to demand that Iran stop persecuting Bahá’ís and other religious minorities.

Last year, the State Department’s International Religious Freedom Report identified eight countries guilty of “particularly severe violations of religious freedom” — Burma, China, Eritrea, Iran, North Korea, Saudi Arabia, Sudan and Uzbekistan. These eight may be the worst of the worst, but they’re far from alone in restricting religious liberty, whether through violence, oppressive laws, or by merely looking the other way when abuses occur.

Blasphemy and apostasy are still criminal acts in dozens of countries. Blasphemous libel laws were only abolished in Wales and England (where I’m based) five years ago and are still on the books in Northern Ireland, Canada, New Zealand and parts of Australia. Some countries rarely invoke such laws. Others use them regularly to stifle speech and crush dissent.

Around the world, there are laws against breaching the sanctity of religion (Finland), injuring or defiling places of worship (India), defaming religious societies (Germany), vilifying a religion or lawful cult (Malta), injuring religious sentiment (Israel), insulting religious feelings (Russia) and maliciously mocking religious convictions (Switzerland) to cite just a few examples. The penalty for violating such laws? Fines, imprisonment and, in several countries, even death.

Laws and regulations on religious freedom should not be used to privilege one faith (or none) over another, but they should also not be used to suppress freedom of expression. I’ve been working on free speech for quite some time, as a founding member and editor at Free Speech Debate and more recently as digital policy advisor at Index on Censorship, both in England.

Given my background, don’t be surprised if my arguments here sometimes err on the side of freedom rather than aligning with a particular political party, ideology, nation or faith. One week I might harangue protesters for shouting down religious leaders at a rally. The next I might champion the protesters’ right to have done so in the first place. Freedom to preach and freedom of speech are, after all, both essential to basic freedom, as the First Amendment makes clear.

I’ll use this blog to explore today’s hot button issues, many of which have religious liberty at their core. In the U.S. that’s same-sex marriage, education, abortion, gun control…the list goes on. Internationally I might look at religious freedom policies in a particular region or country, comment on recent events, or post on-the-ground interviews and analysis from around the world. Rest assured, we won’t run out of topics to discuss.

In addition to regular blog posts, I’ll also recap the top religious freedom stories and developments each week. If you don’t want to wait until Monday morning for the recap, you can follow my Twitter stream @brianpellot.

Rather than protest or outrage, I hope this blog prompts debate in the comments section below. Occasionally I’ll finish an entry by posing a question to readers based on what I’m writing about. Since this is just an introductory blog post, let’s get started with a general question to stir the pot.

In a famous First Amendment case, Supreme Court Justice Oliver Wendell Holmes, Jr. wrote, “The most stringent protection of free speech would not protect a man in falsely shouting fire in a theatre and causing a panic.”

Moving from free speech to religion, should shouting “There is no God” in a crowded house of worship be considered an act of religious freedom?

Worshippers and faith leaders probably have an opinion, some governments might too. But so do we, so let’s debate.

Posted in
Beliefs Brian Pellot: On Freedom Opinion
Get the RNS spiritual guide to the 2020 election

Opinion
Against the darkness: Remembering Pittsburgh’s Tree of Life shooting
Opinion
My child with Down syndrome is not a political statement — and neither is Amy Coney Barrett’s
News
In Disney’s ‘Clouds,’ Justin Baldoni makes a teen cancer movie about joy
News Analysis
The top three faith moments in the Harris-Pence vice presidential debate
Opinion
Calling all women: It’s time to take our stand together against tyranny and injustice
© Copyright 2020, Religion News Service. All rights reserved. Use of and/or registration on any portion of this site constitutes acceptance of our User Agreement and Privacy Policy, Privacy Statement and Cookie Notice. The material on this site may not be reproduced, distributed, transmitted, cached or otherwise used, except with the prior written permission of Religion News Service.